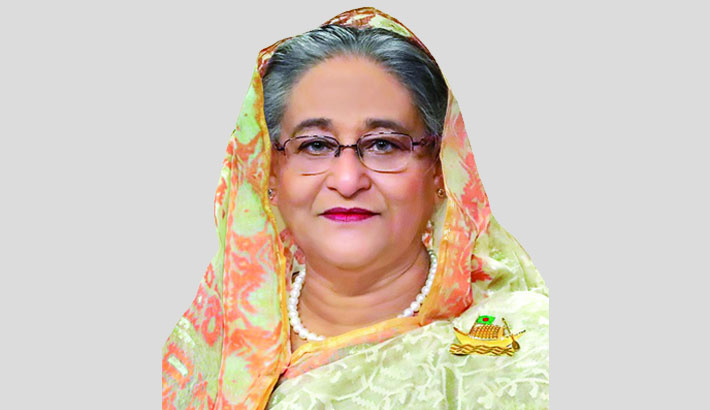 Prime Minister Sheikh Hasina on Wednesday called upon people to take the country forward by foiling all conspiracies of the evil forces.

“It is now time only to go forward— no looking back. We must build a hunger and poverty-free and non-communal golden Bangladesh as dreamt by Father of the Nation Bangabandhu Sheikh Mujibur Rahman.We’ll build a country where there will be no oppression and deprivation. It is our today’s pledge,” she said.

Sheikh Hasina, the eldest daughter of Bangabandhu, made the pledge while inaugurating a 10-day special programme, marking the golden jubilee of the country’s independence and and Bangabandhu’s birth centenary at the National Parade Ground in the capital.

Reminding the people about the anti-liberation elements, Sheikh Hasina urged people to take the country forward by resisting all the evil forces who are active at home and abroad.

Bangladesh is celebrating the golden jubilee of its independence at a time when the Awami League, which led the nation in achieving its independence under the leadership of Bangabandhu, is in power.

Sheikh Hasina said the wait for economic emancipation of the people is going to an end.

“We are  going to celebrate the golden jubilee of our independence at a time when the country has got the final recommendation for its graduation to a developing country status from the least development country,” she said.

Listing the country’s development programmes, the premier said per capita income has crossed $2000 landmark while poverty has come down to 20.5 per cent.

The country is self-reliant in food production while life expectancy has risen to 73 years, she said, adding that Bangladesh has also marked a significant progress in socio-economic index.

“Today’s achievement is the outcome of last 12 years’ efforts of the Awami League-led government,” she said.

The premier claimed that it will be not so easy to lower the position that Bangladesh has reached. “An excellent example in this regard is that the country has been able to successfully handle the coronavirus pandemic,” she said.

Reminiscing about Bangabandhu’s long struggle for independent Bangladesh, she said, “Our freedom is the fruit of the success of the continuous struggle for the status of mother language started by Bangabandhu Sheikh Mujib on March 11, 1948 with the ultimate target of political-economic and cultural emancipation of Bangalis.”

She said it was a war-ravaged country, which was under hundreds of years of subjugation. In just three and a half years, Bangabandhu carried out a mammoth task of building a full-fledged sovereign state where people had been suffering from exploitation, deprivation, hunger, and poverty.

She expressed her gratitude to all the friendly countries and leaders who extended necessary help during the great liberation war, the struggle for freedom and the post-war reconstruction of the country.

“Father of the Nation Bangabandhu Sheikh Mujibur Rahman had so many dreams. He envisioned building Bangladesh as a developed and prosperous ‘Golden Bangladesh’. But the cruel bullets of the killers snatched him from us on 15 August 1975,” she said.

The premier said Bangabandhu Sheikh Mujibur Rahman was born in Tungipara on March 17, 1920. He illuminated the life of the Bangali community and brought freedom for them.

“On the other hand, she said, “March 26 is our Independence Day. This year marks the 50th anniversary of our independence. We’re celebrating Mujib Year and the golden jubilee of independence simultaneously.”

With the theme 'Mujib Chirantan' in mind, Sheikh Hasina said, “We’ve undertaken special celebration programmes at home and abroad from March 17 to March 26 this year.”

“Today is its inauguration. However, we’ll continue celebrations till December 16, 2021 as it is our Great Victory Day. Colourful arrangements have been made for various programmes.”

She paid deep homage to the memory of Father of the Nation Bangabandhu Sheikh Mujibur Rahman, the four national leaders of the liberation war, three million martyrs, and two lakh dishonoured mothers-sisters and saluted the valiant freedom fighters.

She expressed her sincere gratitude to Maldives President Ibrahim Mohamed Salih for attending the inaugural programme.