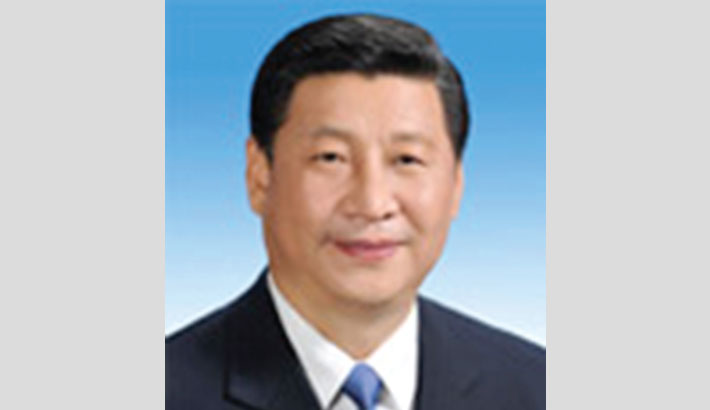 Chinese President Xi Jinping has said the people of Bangladesh over the five decades of independence have stayed true to their conviction and triumphed over challenge one after another and entered a fast lane of growth.

“Under Prime Minister Sheikh Hasina’s leadership, Bangladesh has focused on reform and development and entered a fast lane of growth,” he said in a video message at the grand opening of the celebrations of the birth centenary of Father of the Nation Bangabandhu Sheikh Mujibur Rahman and the Golden Jubilee of Independence of Bangladesh at the Parade Ground on Wednesday.

With a GDP growing more than six percent every year for year running, the Chinese President said Bangladesh has bettered the lives of its own people and made important contributions to poverty reduction in the world. “As a friendly neighbour, China rejoices at a prosperous and progressing Bangladesh.”

Greeting the people of Bangladesh on the two occasions, Xi Jinping said Father of the Nation Bangabandhu Sheikh Mujibur Rahman founded the People’s Republic of Bangladesh fifty years ago. “A man who devoted his whole life to his country and people, he is fondly remembered by the people in Bangladesh this day. The “Sonar Bangla” he envisioned is still galvanising the 160 million Bangladeshi people in their pursuit of national rejuvenation. The principle of “friendship to all and malice towards none” he laid out remains the bedrock of Bangladesh’s foreign policy,” the Chinese President said.

He also said Father of the Nation Bangabandhu Sheikh Mujibur Rahman was an old and good friend of the Chinese people. On his two visits to China in 1952 and 1957, Bangabandhu forged friendships with Chairman Mao Zedong and Premier Zhou Enlai, and other Chinese leaders of the elder generation.

“As a Chinese saying goes, “Do not forget those who dug the well when drinking water from it.” We must always remember what the elder generation of leaders did for growth of China-Bangladesh relations, and shall pass on the baton of the China-Bangladesh friendship to future generations,” said President Xi.

China and Bangladesh have always been friendly neighbours, with the ancient Silk Road standing as a witness to a friendship that spans over the millennia. Since China and Bangladesh established diplomatic ties 46 years ago, our two sides have treated each other with mutual respect and as equals.

“The two countries have supported each other and made progress together. Today, both countries are at a crucial stage of revitalisation and development. The Chinese dream of great national renewal can well connect with the “Sonar Bangla” dream,” said the Chinese leader.

Recalling his visit to Bangladesh in 2016, President Xi said Prime Minister Hasina and he upgraded the bilateral ties to a strategic partnership of cooperation.

“Bangladesh is the first South Asian country to have signed with China an intergovernmental document on Belt and Road cooperation. The practical cooperation has delivered real benefits to the people of both countries,” he said.

Turning to the pandemic, he said the two countries have stood together during these trying times since COVID-19 struck.

“China will not forget that at the height of its fight against the coronavirus, the Bangladeshi government and people donated a large quantity of medical supplies to China. China, too, has done what it could to assist the COVID-19 response in Bangladesh.”

Despite the challenges caused by the pandemic, President Xi said the two countries have continued to work together in Belt and Road cooperation.

Key projects undertaken by Chinese companies, including the Padma Bridge and the Bangabandhu Tunnel under the Karnaphuli River, have seen big breakthroughs, he said, adding that as many as 97 per cent of Bangladeshi products now enjoy duty-free access to China.

President Xi said he places high importance on growing China’s relations with Bangladesh and will work with President Hamid and Prime Minister Hasina to strengthen the complementarity between two development strategies, advance Belt and Road cooperation, and take the strategic partnership of cooperation to new heights.