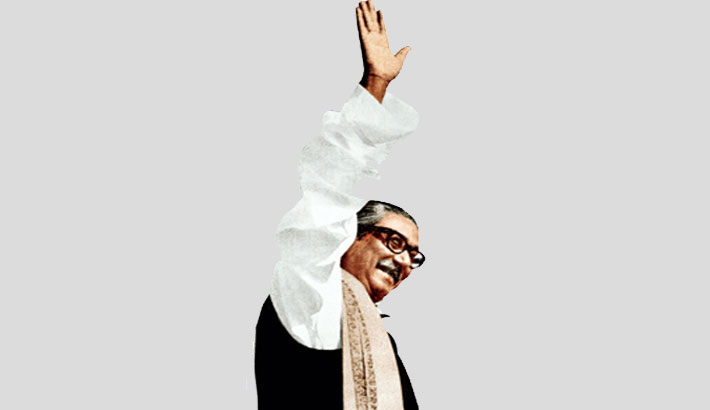 On 8 January 1972, Bangabandhu, while addressing his first press conference at Claridge’s Hotel, London, faced a pointed question from a journalist: “Bangladesh is totally devasted. What would you do by getting back home?“ Confident as he always was, quick came Bangabandhu’s repartee in a single staccato sentence: “We shall rise again if I have my land and people.” A visionary Bangabandhu was, indeed, envisioning a Phoenix-like rise for Bangladesh.

Dr. Henry Kissinger, perplexed as he was at the unwanted emergence of Bangladesh, lost no time to make a Cassandra-like prognostication that the country would be a bottomless basket. In a 1976 publication, two famed development pundits came up with at least three terse comments bearing on the bleak future of development in Bangladesh (Just Faaland and J.R. Parkison, Bangladesh: The Test Case for Development).

Nevertheless, as per his prediction at the London Press conference, Bangabandhu did make the beginning for Bangladesh development; and that too with his capital of land and people. On 10 January 1972, in his homecoming address, the roadmap for Bangladesh reconstruction and development was meticulously laid out. “We confront a barrage of problems,” as he directed, “which needs immediate solution. Build anew the devastated Bangla.” Economic emancipation and political development of the just-born delicate state were foreshowed as he spoke in unequivocal terms, “The people of Bangladesh will live in a free environment happily with food and clothing to their hearts content, this has been my endeavour.” More was said in this context: “If the countrymen do not get food, youths do not get employment or get job, then this independence will fail – not to be completed.” At the same time, the ideological basis of the new state was clearly delineated when Bangabandhu said, “Bangladesh will be an ideal state; and the basis of which will not be any religion. The basis of the state will be democracy, socialism and secularism (nationalism was added at the time of writing the Constitution). The people were exhorted to wage “a struggle for emancipation” in independent Bangladesh. On 14 March 1972, in a speech Bangabandhu raised the slogan: “This time the struggle is for building country.”

But Bangabandhu’s speech on 26 March 1975 was experience-hardened, as it was delivered following the introduction of the Bangladesh Krishak Sramik Awami League (BKSAL) system. Containing in itself a revolutionary turn-around of Bangladesh, the speech had pointed and relevant directives: “Political freedom fails, if economic freedom does not come along. If the wretched people do not have two square meals a day, if they do not have clothing, if the unemployment problem is not mitigated, then peace will not come back to the life of people.” Again, there was an instruction that, “We are to stand on our feet by being self-reliant.”

The stark reality that existed in the war-devastated Bangladesh came out vividly in the speech of Bangabandhu on 26 March 1972, on the first anniversary of independence, “We confront today a mountain of problems. We are at the threshold of the critical juncture of a great crisis. There are 1 crore returnee homeless, 2 crore internally displaced persons, devasted and standstill ports of Chalna and Chittagong, non-functional factories, disrupted electricity supply, huge number of the unemployed, chaotic business supply-system, broken roads and bridges and snapped transport system, poverty, hunger, rising prices of products and uncultivated lands —- we have inherited all these.”

The same speech had the roadmap for responding to these challenges as it was said with an upbeat note, “My government has accepted the challenge of overcoming the crisis on the basis of a deep love of people, their confidence, indomitable courage and incomparable unity.”

Bangabandhu had, in total, 1,314 days to rebuild Bangladesh, which were divided into two phases: pre-BKSAL (10 January 1972-24 January 1975), and post-BKSAL (25 January 1975-14 August 1975). During the first phase, the trend was to reconstruct Bangladesh with the traditional administrative apparatuses, an approach which was warned against by Bangabandhu’s well-wisher Fidel Castro. Bangabandhu had also to come to such a conclusion by the time he switched to the BKSAL system. The experience which Bangabandhu gathered during the first phase had been a mixed one. Indeed, the turn-around by the BKSAL was an inevitable consequence of what had happened during the first phase. Bangabandhu himself characterized the system as the democracy of the oppressed. The BKSAL had all the potentialities to effect a revolutionary turn-around for Bangladesh; and, in the words of Bangabandhu himself, this was “a second revolution.” It is to be noted that, the BKSAL was, as is generally misunderstood, not a party, rather a common national platform, improvised for temporary functional duration to tide over the pressing problems.

The internal reconstruction of Bangladesh had its tangible beginning with the framing and implementing of the Constitution of the Republic; which was prioritized, as in Bangabandhu’s perception, a state without a constitution was a boat without a boatman. Completed within nine months, this Constitution had praises from all across the world. It may be remembered that Pakistan had taken nine years to write its constitution. Despite heavy financial constraints, physical infrastructural development gathered momentum. An education commission, headed by the eminent educationist and scientist Dr. Kudrat-i-Khuda, was formed to outline an education system befitting an independent country. The primary schools were nationalized; eleven thousand new ones were established. Moreover, there was the highest allocation for education in the first budget. Another step of considerable significance was promulgation of the 1973 Order, which ensured academic freedom for universities.

The immediate need for Bangladesh following independence was diplomatic recognition; for, recognition would have ensured inflow of aid and assistance. This was the reason why Bangabandhu, in his 10 January speech, gave a clarion call for the international community to expedite recognition and aid/assistance. It is worthwhile noting that by 15 August 1975, as many as 134 countries had recognized Bangladesh. The non-recognizing countries included China, Saudi Arabia, Iran and Jordan. But there is a plenty of evidence to suggest that normalization bids had been working well even before August 1975. On 23 February 1974, Bangladesh secured membership of the Organization of the Islamic Conference (now Organization of Islamic Cooperation). The day before, Pakistan had recognized Bangladesh. Moreover, while welcoming Bangabandhu at the Lahore airport, the host-country Pakistan had to hoist the Bangladesh flag and play Bangladesh national anthem in band. On 17 September, Bangladesh became the 136th member of the United Nations. On 25 September, Bangabandhu addressed the 29th United Nations General Assembly in Bangla. All in all, at the beginning of 1972, Bangladesh had no recognition and international friends; but by the end of 1974, this country had its dignified place in the comity of nations.

In the speech of 26 March 1975, Bangabandhu said something for self (or collective)-instruction: “We would like to hit hard this society in the same way as we had hit the Pakistanis. We would like to repeat the same hit insofar as this moth-eaten social system is concerned.” There was also a strong indication for revamping the age-worn bureaucracy: “This moth-eaten administration dating back to the English and Pakistani days cannot go on; it has to be restructured. … I have pondered over during the last three years. I have reached the conviction by watching and hearing and the essence of the Constitution must be reached to the people.” The end-result of Bangabandhu’s cogitation and thereby of conviction was the new system of the BKSAL, which, in its preparatory 233 days, had improved every sector concerning public life; which was corroborated even in the Central Intelligence Agency (CIA) documents. During these days of Bangabandhu, the growth rate of national economy averaged at 7.4 per cent.

Bangladesh had a challenged and constrained beginning as Bangabandhu set about to rebuild the war-devastated country. By the time Bangabandhu had a cruel exit from the world, Bangladesh was found to stand tall on its strong feet. As three years elapsed, an experience-hardened Bangabandhu had to switch to a new system, the rationale for which was persuasively explained by Bangabandhu himself: “Why have I changed the system? I have changed the system to make the poor people smile. I have changed the system to bring back order.” But before the new system could yield these results, Bangabandhu was assassinated. Nevertheless, it was Bangabandhu, and nobody else, who launched Bangladesh on the road to prosperity. In this context, the words of John C. Maxwell sounds relevant: “A leader is one who knows the way, goes the way; and shows the way.”

The writer is the Bangabandhu Chair Professor, Bangladesh University of Professionals (BUP)