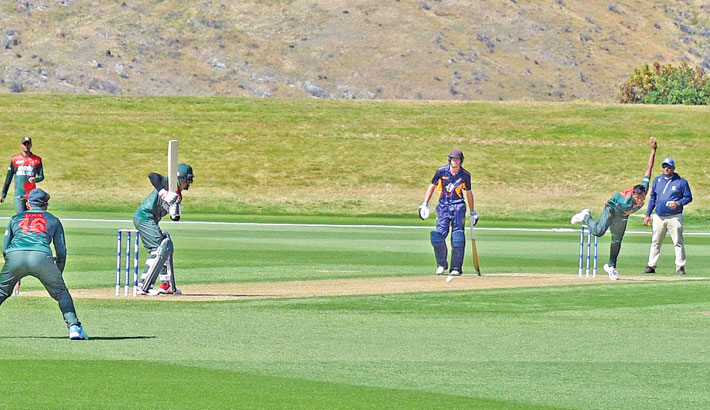 Mohammad Mithun made a strong claim for a spot in the middle-order as he played an unbeaten 66-run innings in the lone intra-squad warm-up game at John Davies Oval, Queenstown in New Zealand on Tuesday.

Mithun, who represented Tamim XI, put up a useful partnership with a local cricketer Benji Culhane, who made 46 not out and it helped them post 233-5 in 50 overs against Najmul XI.

Pacer Rubel Hossain, who finished with 4-42, also proved his point ahead of the ODI series, scheduled to start on March 20 in Dunedin.

Najmul XI won the match comfortably by nine wickets as they reached 235-1 in 46.5 overs with Najmul Hossain (40), Liton Das (59), Mehidy Hasan (50) all scored handy knocks before their retiring out while Mushfiqur Rahim remained unbeaten on 54.

Mustafizur Rahman took the only wicket as Tamim XI bowlers failed to make any inroads that prompted the team management to call several batsmen back into the dressing room after they spent a considerable amount of time in the middle.

Bangladesh are eyeing for solidity in the middle-order more so after Shakib Al Hassan decided not to travel with the team after BCB granted him paternity leave.

Mithun looked well-aware to seize the opportunity and prove his mettle in front of the management in a difficult time.

Mehidy admitted that the wicket was difficult to bat on in the morning that proved the effort required by Mithun to score those runs and helped his team post a reasonable total.

“It was quite cloudy conditions in the morning so it assisted the bowlers quite much and our bowlers performed nicely according to the condition especially Rubel (Hossain) bhai, who bowled to the right areas and grabbed four wickets maintaining a good line and length alongside Saifuddin and Shoriful (Islam). They all performed well,’’ said Mehidy after the match.

Bangladesh team management told The Daily Sun that their ODI skipper Tamim Iqbal was rested for the contest as part of precaution of the hamstring injury that he received recently.

Mehidy added that every member of the team is ready to give their best shot in the upcoming series comprising three ODIs and as many T20Is.

“Everyone has been performing well and being energetic in the field as we had practised around seven days upon coming here (Queenstown) along with the seven days practice (Christchurch) after the quarantine period was over,” he said.

“I think this particular practice match will give us the much-needed confidence before colliding with the New Zealand team in the ODIs,” added Mehidy.

Mehidy also said that he is trying to follow the advice of their spin consultant Daniel Vettori in the game.

“As far as my performance goes, I’ve tried to bowl at the right areas and also had been practising with some variations with our spin consultant Daniel Vettori. He advised me with several tips, which I had applied in the match,” he said.

‘’The variation in the bowling is very important, as Daniel (Vettori) has advised me; he also mentioned applying variation in a couple of deliveries, as the line and the lengths are pretty important in these conditions.

“So in my estimation, if we carry on with the appropriate line and lengths with the correct field-setup, then we should be able to contain the runs whether or not we don’t get wickets regularly and I’ve concentrated mostly on that part,” he added.