Don’t ‘cause a stink’ 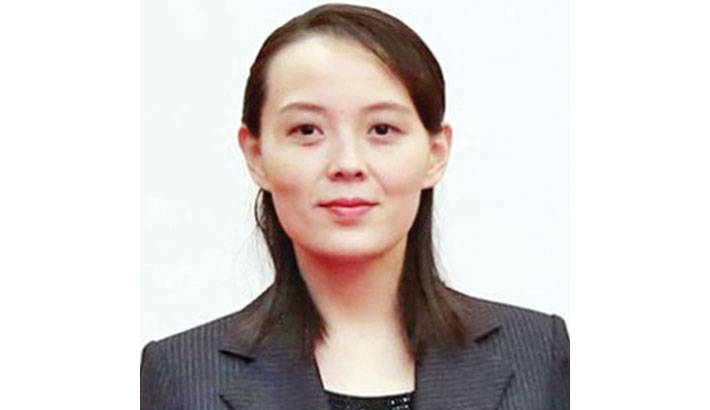 Pentagon chief Lloyd Austin and Secretary of State Antony Blinken arrived in Japan on Monday on their first overseas trip, aimed at rallying military alliances as a bulwark against China and cementing a united front against the nuclear-armed North. The statement by Kim Yo Jong, a key adviser to her brother, was Pyongyang’s first explicit reference to the new leadership in Washington, more than four months after Joe Biden was elected to replace Donald Trump—although it still did not mention the Democrat by name. The United States and South Korea began joint military exercises last week and Pyongyang’s official news agency carried a statement from her warning the new US administration: “If it wants to sleep in peace for coming four years, it had better refrain from causing a stink at its first step.” Trump’s unorthodox approach to foreign policy saw him trade insults and threats of war with Kim Jong Un before an extraordinary diplomatic bromance that saw a series of headline-grabbing meetings.

But ultimately no progress was made towards Washington’s declared aim of denuclearising North Korea, which is under multiple international sanctions for its banned weapons programmes. It has isolated itself further, imposing a strict border closure to protect itself against the coronavirus pandemic that first emerged in neighbouring China. Shortly before Biden’s January inauguration, leader Kim decried the US as his country’s “foremost principal enemy” and Pyongyang unveiled a new submarine-launched ballistic missile at a military parade.

The talks process was brokered by South Korea’s President Moon Jae-in but relations between Seoul and Pyongyang have been in deep freeze since Kim and Trump’s summit in Hanoi collapsed in February 2019. Kim Yo Jong is a trusted adviser to her brother and was a key voice when inter-Korean tensions mounted last year, culminating in the North blowing up a liaison office on its side of the border. Shin Beom-chul, a researcher at the Korea Research Institute for National Strategy, pointed out that her announcements have previously represented incremental steps by Pyongyang.

“North Korea has judged that the US will not offer enough concessions and so has released this statement ahead of Blinken and Austin’s visit to Seoul,” he told AFP.

There was a “high possibility” of a military provocation by North Korea during or immediately after the Americans’ trip, he added.

Seoul and Washington are treaty allies, with the United States stationing around 28,500 troops in South Korea to defend it against its neighbour, and they began computer-simulated joint military exercises last week.

The North always condemns such drills as preparations for invasion, and in her statement, Kim Yo Jong said Seoul had “opted for ‘war in March’ and ‘crisis in March’... instead of ‘warmth in March’”.

“Those warm spring days three years ago, which they desire so much, won’t come easily again”, she added, threatening to scrap a North-South military agreement “if they dare resort to more provocative acts”.

Austin and Blinken arrived in Tokyo on Monday and held talks Tuesday that focussed on China but also addressed the new administration’s review of US policy towards Pyongyang.

In a joint statement, the US and Japanese officials called again for “the complete denuclearisation of North Korea”—a phrase that is anathema to Pyongyang, which prefers the broader and more ambiguous “denuclearisation of the Korean peninsula”.

Blinken declined to comment on Kim Yo Jong’s warning, saying: “We’re looking at whether various additional pressure measures could be effective, whether there are diplomatic paths that make sense, all of that is under review.”

He and Austin are due to hold consultations with their South Korean counterparts in Seoul on Thursday.

Washington has attempted to reach out to Pyongyang “through several channels starting in mid-February, including in New York”, state department deputy spokesperson Jalina Porter told reporters on Monday.

“To date, we’ve not received any response from Pyongyang,” she added.

The “New York channel” is a reference to the North’s mission to the United Nations, as Pyongyang and Washington do not maintain diplomatic relations.