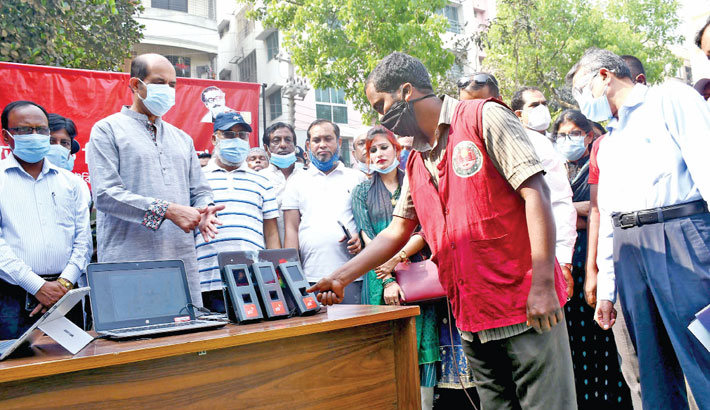 DNCC Mayor Atiqul Islam shows a mosquito control worker the system of pushing thumb at a biometric attendance device at the inaugural ceremony of the system in the capital’s Uttara area on Tuesday. —SUN PHOTO

Atiqul inaugurated the system in Kalyan Samity Office area of Uttara in the capital.

Speaking on the occasion, he said that he has doubts as to whether 1200 mosquito control workers attend work regularly.

“We want to monitor the attendance of mosquito control workers with the help of the device.”

Atiqul said workers don’t need to go ward office, as it can be done from workstation.

During a visit to a canal, DNCC Mayor found that an illegal office of “Safa Tower” project over the Khidir Khal (canal) was set up. He directed the authorities concerned to demolish it.

“The space of the office belongs to City Corporation and it was in the middle of the canal.”

The DNCC mayor also said that they inform people before any illegal structures are pulled down.