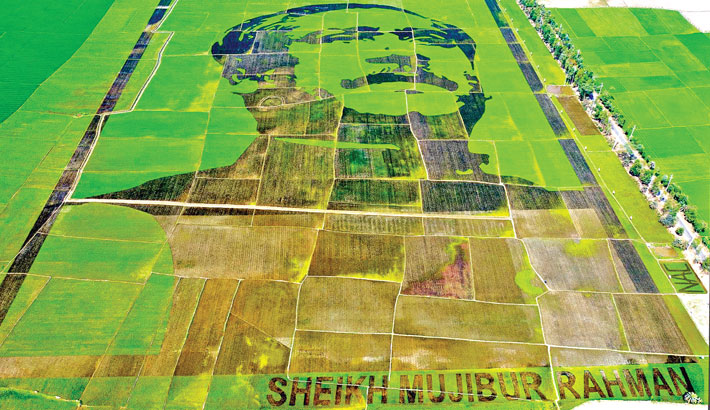 The Guinness Book of World Records on Tuesday recognised the crop-field portrait of Bangabandhu Sheikh Mujibur Rahman as the largest in the world.

AFM Bahauddin Nasim said that the representatives of Guinness World Records confirmed the matter on Tuesday.

He also said the Guinness World Records authorities will hand over the certificate via video conferencing on Wednesday afternoon.

The nation will celebrate the 101st birth anniversary of Bangabandhu Sheikh Mujibur Rahman on the day.

“The Guinness World Records authority has already declared it on their website,” said Nasim.

According to the website: “The largest crop field mosaic [image] is 119,430.273sqm (1,285,536.75sqft) and was achieved by AFM Bahauddin Nasim and KSM Mostafizur Rahman in an attempt organised by National AgriCare Import and Export Ltd [all Bangladesh] in Dhaka, Bangladesh, on 9 March 2021.”

“The crop mosaic depicts the father of the nation of Bangladesh, Bangabandhu Sheikh Mujibur Rahman, and was to commemorate the 100 year anniversary on 17th March,” it said.

On a 105-bigha land of Bhobanipur union of Bogura’s Sherpur, Bangabandhu’s portrait has been crafted. The massive portrait of Bangabandhu was completed on March 9.