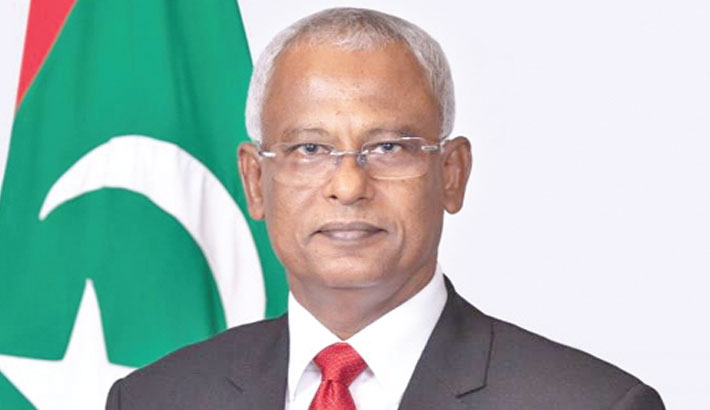 Maldives President Ibrahim Mohamed Solih on Tuesday greeted the government and the people of Bangladesh, marking the birth centenary of Father of the Nation Bangabandhu Sheikh Mujibur Rahman.

“It is an honour and privilege for me to undertake this visit to Bangladesh at the invitation of my counterpart President Abdul Hamid to celebrate the birth centenary of Sheikh Mujibur Rahman and the golden jubilee of Bangladesh’s independence,” he said in a message on the eve of 101st birth anniversary of the Father of the Nation.

“Bangabandhu Sheikh Mujibur Rahman is an inspiration, a timeless icon of freedom and a charismatic leader, not only to the people of Bangladesh but also to people across the world,” he said.

Recalling his sacrifices to secure the rights of Bengalis and achieve independence for Bangladesh, he said, “The legacy and exemplary statesmanship of Bangabandhu will continue to inspire future generations.”

The Maldives President also congratulated the government and the people of Bangladesh for graduating from the United Nation’s Least Developed Country (LDC) to Developing Country status.

I wish to note with appreciation the exemplary management of the COVID-19 pandemic by the government of Prime Minister Sheikh Hasina, he said.

The Maldives President also recalled the 43rd anniversary of the establishment of diplomatic relations between two countries.

The historical linkages between the two communities go back much further, through the ancient Maldives-Bengal Cowrie trade, he said.

The President also said, “Maldives and Bangladesh share much in common. We are both Muslim countries aspiring to achieve higher levels of socio-economic development for our citizens, and we stand on common ground in the international arena, as we advocate for addressing pressing issues of common concern, such as climate change and rising sea-levels.”

Marking the occasion, in a separate message, Maldives foreign minister Abdullah Shahid wished the Bangladesh government and people of the country.

“Bangabandhu remains in our hearts as a visionary leader, and his contribution to the independence and development of Bangladesh is immeasurable,” he said.

“His legacy remains strong and I am confident that Bangladesh will continue on its path towards progress and development, to achieve Bangabandhu’s vision for a ‘Sonar Bangladesh’,” he added.