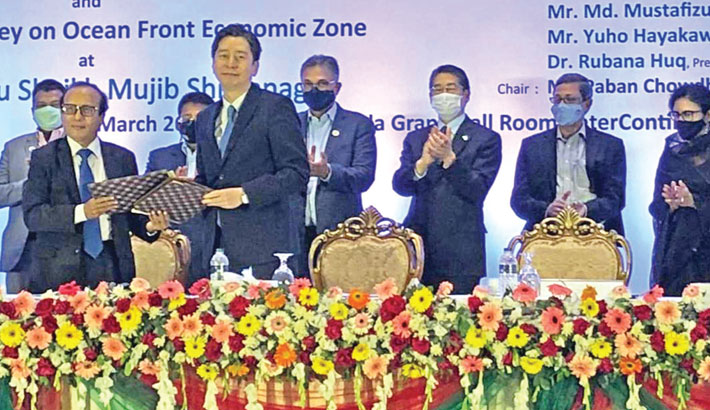 BEZA Executive Chairman Paban Chowdhury and Japanese Ambassador to Bangladesh Naoki Ito exchange documents after signing minutes of meetings at a function in the capital on Monday.

JICA and Bangladesh Economic Zones Authority (BEZA) signed minutes of meetings at a function at a city hotel on Monday for conducting a preparatory survey on the project.

JICA is assisting BEZA and Sojitz Corporation for the PPP project, says a JICA release.

The Ocean Front Economic Zone Development Project has been proposed to JICA by Sojitz Corporation, with an aim to develop or operate this economic zone in Bangabandhu Sheikh Mujib Shilpa Nagar located in Mirsarai of Chattogram.

The objective of the Preparatory Survey is to assess feasibility of this Project and to propose a financially viable project design scheme under the concept of Public-Private-Partnership (PPP).

To support these policies, BEZA targeted that BSMSN will be developed as a comprehensive industrial city including social infrastructure on a contiguous 30,000 acres of land and create employment opportunities for 1.5 million people within the next 15 years and ensure US$40 billion export from this industrial enclave.

This Preparatory Study will contribute to the realization of this plan.

Under the umbrella of the BIG-B, Bay of Bengal Industrial Growth Belt, Initiative, agreed between Prime Minister Sheikh Hasina and Japan’s Prime Minister Shinzo Abe in 2014, JICA has closely cooperated with BEZA in assisting the development of Bangladesh Special EZ at Araihazar and the regional development in Moheshkhali-Matarbari area.

This Project at Bangabandhu Sheikh Mujib Shilpanagar will uplift and move the BIG-B Initiative to the new frontier.