‘BIG-B to turn Bangladesh into a hub of regional connectivity’ 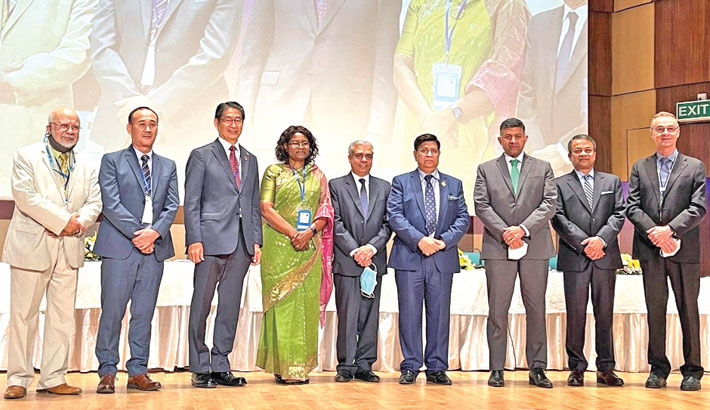 Foreign Minister AK Abdul Momen and Ambassador of Japan to Bangladesh ITO Naoki along with others pose for a photo at the inaugural ceremony of a two-day regional conference on ‘The Bay of Bengal as Connectivity Hub in Indo-Pacific Region’ at Independent University Bangladesh in the capital on Sunday. SUN photo

Ambassador of Japan ITO Naoki has emphasised the importance of bringing Bangladesh into a hub of regional connectivity, bridging South Asia to Southeast and East Asia, through realizing mega infrastructure projects under the initiative of “Bay of Bengal Industrial Growth Belt (BIG-B)”.

Under the BIG-B, Japan is implementing several mega-projetc including Matarbari Deep-Sea Port, Dhaka MRT and Hazrat Shahjalal International Airport Extension, which will strategically significant for Bangladesh to increase its economic opportunities, he said.

The ambassador told this while addressing a two-day regional conference on “The Bay of Bengal as Connectivity Hub in Indo-Pacific Region” which was jointly organised by the Centre for Bay of Bengal Studies and the Independent University Bangladesh (IUB) on Sunday.

Prof Tanaka said “The Indo-Pacific region is becoming the global center of economic gravity. The vision of a Free and Open Indo-Pacific is based on this historic trend. Preservation of peace is the essential condition of its realization.”

Nishida Ippeita, senior research fellow of Sasakawa Peace Foundation, spoke at the session. He pointed out strategic eminence of the Bay of Bengal region for Japan would outgrow.

He also suggested Japan to take active roles in shaping the regional debate and addressing vulnerabilities, as connectivity to the east would bring profound impact on the outlook of the Indo-Pacific environment