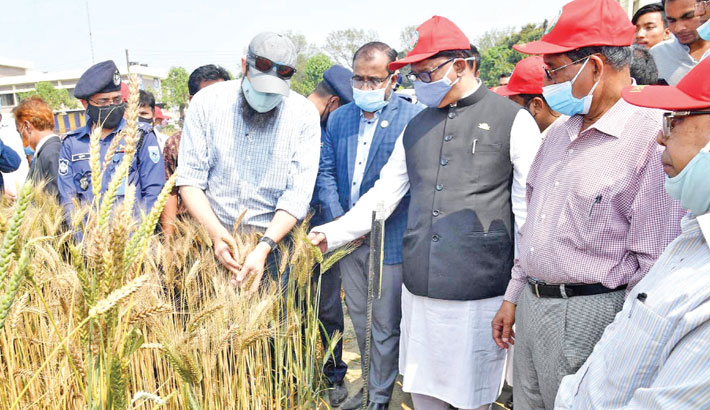 Wheat cultivation and production will increase manifold in the country with the introduction of blast disease-resistant varieties of wheat, Agriculture Minister Md Abdur Razzaque said on Monday.

“The demand for wheat has been increasing day by day in the country but the climate here is not very favourable for wheat cultivation. Local demand can’t be met by local production,” the minister said while visiting the research activities of Bangladesh Wheat and Maize Research Institute (BWMRI) at Nashipur in Dinajpur Sadar.

“Many varieties of wheat were popular in the country earlier, but those were easily affected by various diseases including blast. Newly invented varieties like BARI Gom-33 are blast resistant. Prospect of these high yielding varieties are much higher in the country,” he said.

“Improved seeds will be produced from these verities. This will ultimately increase the acreage of wheat and boost the production.”

After visiting the research activities, the agriculture minister inaugurated “Bangabandhu Corner” at Bangladesh Wheat and Maize Research Institute on the occasion of Mujib Year.

Later in the afternoon, he inaugurated a four-day “Agricultural Technology Exhibition Fair-2021” at the Institute premises and attended a view exchange meeting with officials at the workshop.

BARI GOm-33 is zinc enriched, heat tolerable, resistant to blast disease with a harvesting tenure of 110-115 days. Production is estimated at 4.6-5 tonnes from per hectors of land.

WMRI Gom-2 is also a variety resistant to blast, leaf blight and leaf rust with a lifespan of 106-112 days. Production is 4.5-5.5 tonnes per hector.

WMRI Gom-3 is resistant to blast, leaf blight and leaf rust, heat and has a lifespan is 108-114 days. It is a short variety and the production is 4-4.5 tonnes per hector.