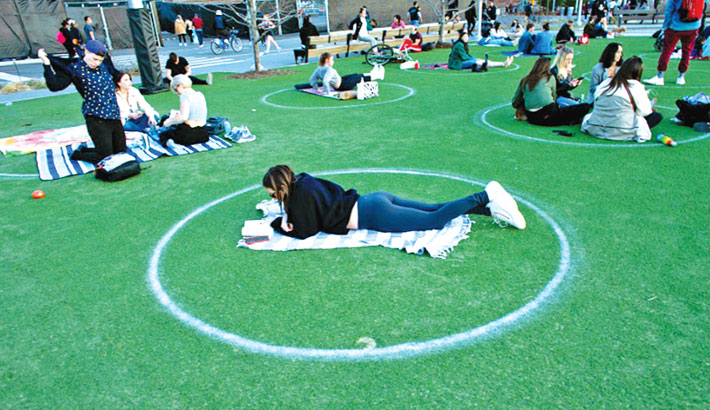 The United States’ top pandemic advisor said on Sunday that authorities were considering cutting social distancing rules to three feet (one meter), a move that would change a key tenet of the global fight against Covid-19, reports AFP. Anthony Fauci, a world-respected figure during the coronavirus crisis, said experts at the Centers for Disease Control (CDC) were examining a Massachusetts study that found “no substantial difference” in Covid cases in schools observing six-foot and three-foot rules.

Asked on CNN’s “State of the Union” show whether that meant that a three-foot separation was sufficient, Fauci replied, “It does, indeed.”

“The CDC is very well aware that data are accumulating making it look more like three feet are OK under certain circumstances,” Fauci added.

While cautioning that the CDC was still weighing the data and conducting its own tests, he said its findings would come “soon.”

The six-foot social distancing rule has been a widely-adopted global measure to prevent the spread of the coronavirus, along with mask-wearing and hand-washing.

School officials across the world are under pressure to fully reopen as soon as safely possible, but many say the six-foot requirement makes it difficult without adding portable classrooms or shortening the school day.

Many teachers unions have also insisted on six-foot distancing.

Policies on reopening schools and businesses have varied sharply around the globe as governments try to balance quelling infections with a return to normal life.

The study led by the Beth Deaconess Medical Center in Massachusetts, surveying 251 school districts, found “no substantial difference in the number of cases of Covid-19 among either students or staff” between those observing the three- and six-foot rules when all wore masks.

The findings, published in the journal Clinical Infectious Diseases, add to a growing body of evidence that Covid-19 transmission rates are low in schools.

A three-foot rule would have an enormous impact on prospects not only for fully reopening schools, but also for offices and even public areas such as sports venues.

The United States has the highest Covid fatality toll in the world, now approaching 535,000, but it has seen case numbers and death rates fall this year.

That trend, along with a vaccination program that has reached millions of arms—including three million doses on just Saturday, Fauci said—has spawned growing optimism.

But with states like Texas and Maryland already easing their Covid rules, Fauci warned again against Americans letting down their guard too soon.

Some European countries had done exactly that, he said, pointing to Italy’s recent reimposition of health measures after its latest virus surge.

“It definitely is of concern,” he told CNN.

“That’s exactly what happened in Europe.”