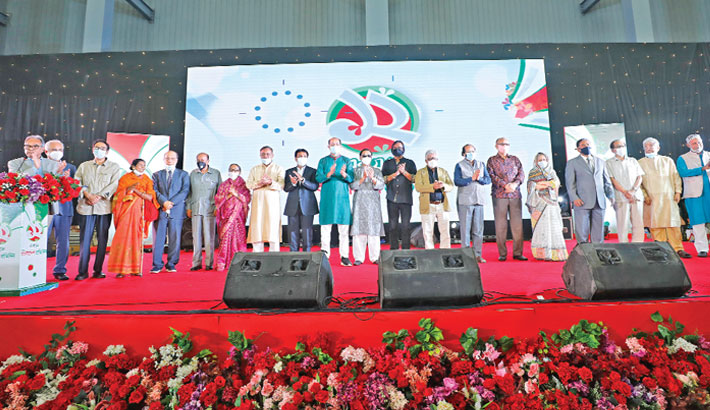 Bangladesh Pratidin, the highest circulated Bangla daily of the country, honoured 19 eminent personalities on Monday for their outstanding contributions in different fields.

On the occasion of its 11th founding anniversary, Bangladesh Pratidin gave the award to the celebrities at a function held at the International Convention City Bashundhara (ICCB) in the capital.

Information Minister Dr Hasan Mahmud handed over crests to the award recipients as the chief guest while Dhaka North City Mayor Atiqul Islam attended the programme as the guest of honour.

Speaking at the function, the information minister said Bangladesh Pratindn has gained huge popularity among the readers as the daily produces news in brief for readers to have a glance about all issues at home and abroad.

“Newspaper is the mirror of a society. Bangladesh Pratidin raises voice for well being of the people of the country. The responsibility of the media is to project the untold stories of people and the country,” he said.

The minister also said Bangladesh has set an example of poverty reduction and food security as the growing progress of the country has surprised the global communities and organisations, including the WFO.

“Bangladesh is now a subject of discussion in the media of neighboring countries as the country has surpassed them different indicators of development,” he added.

He also called upon all the city dwellers to cooperate in keeping Dhaka city clean as it is the capital of the country.