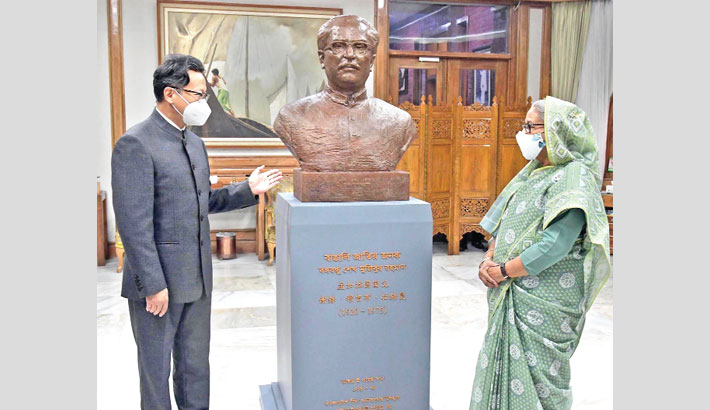 Chinese Ambassador to Bangladesh Li Jiming hands over a mural of Bangabandhu Sheikh Mujibur Rahman to Prime Minister Shiekh Hasina at her official Ganabhaban residence in the capital on Monday. – PID PHOTO

The Chinese Embassy in Dhaka on Monday presented a mural of Father of the Nation Bangabandhu Sheikh Mujibur Rahman to Prime Minister Sheikh Hasina, marking his birth centenary and the golden jubilee of Bangladesh’s independence.

Chinese Ambassador to Bangladesh Li Jiming handed over the mural made of brass to the Prime Minister during a courtesy call on her at her official residence Ganabhaban.

On behalf of his country, Jiming also offered one lakh doses of coronavirus vaccine

to Bangladesh for its emergency use.

The premier, he said, thanked and appreciated the gesture of the Chinese Embassy for presenting the mural of the Father of the Nation.