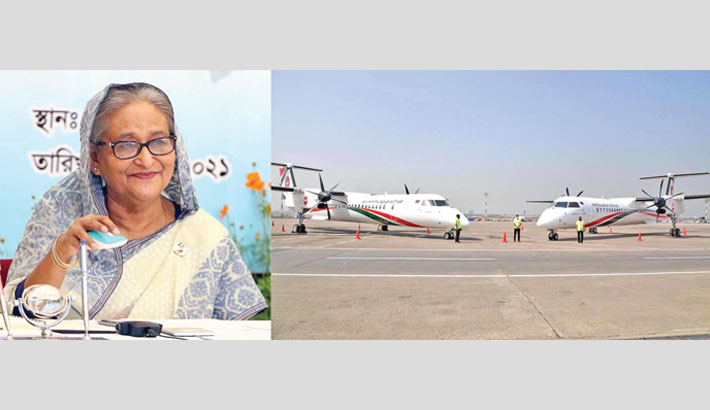 “. . . the more we can improve the passenger services [of Biman] people will be benefited and the country will be developed,” the premier told the commissioning ceremony of the crafts, reports BSS.

She expected that these modern aircrafts would help Biman strengthen its domestic and regional connectivity.

Sheikh Hasina urged Biman to perform its duties with all sincerity as the national airlines, since millions of people had to shed their blood for Bangladesh’s independence.

“We all have the responsibilities to brighten the country’s image,” she said and simultaneously asked Biman to take good care of every aircraft and maintain better passenger services.

“The services to passengers will have to be much better.”

The premier reminded the state-run airlines officials that 16 of its 21 aircraft were brand new which were procured with public money that demanded extra attention to their proper maintenance.

With the Dash 8-Q400 planes Biman would now be able to increase its communication with the neighbouring countries apart from developing it at domestic level.

The ceremony took place at Hazrat Shahjalal International Airport VIP Lounge while the premier joined the function through virtual platform from her official Ganabhaban residence.

The premier said the government currently was constructing the third terminal at Shahjalal International Airport which would be ultramodern in type to handle wide-bodied planes in the country and improve passenger services.

She said the government is upgrading Cox’s Bazar airport to an international one as this airport could play an immense role on the international air route and help Bangladesh prosper more economically.

The premier said Biman earlier used to rent aircraft to carry hajj pilgrims but now takes them by own aircrafts.

She said the government is pulling Bangladesh ahead and will materialize the “Sonar Bangla” as dreamt by Father of the Nation Bangabandhu Sheikh Mujibur Rahman.

A documentary on Dash 8-Q400 aircraft and Biman was also screened at the function.

With the addition of these two new Dash planes, the number of Biman’s aircraft now stood at 21.

The first Dash 8-Q400 aircraft arrived in Bangladesh on November 24 last year, the second one on February 24 and the third one on March 4.

Sheikh Hasina herself named these as “Akash Tari”, Shwetbalaka” and “Dhrubotara”.

Equipped with eco-friendly and state-of-the-art facilities, the Dash 8-Q400 aircrafts have HEPA filter technology which completely purifies the air inside the aircraft by destroying bacteria, viruses and other germs in just 4 minutes that makes the passengers’ journey more refreshing and safe.