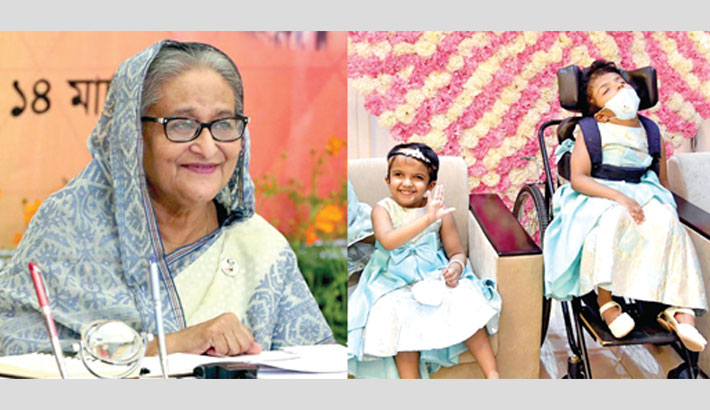 Prime Minister Sheikh Hasina talks to Rabeya and Rokeya at a function arranged at Combined Military Hospital (CMH) in Dhaka on Sunday marking the return of the conjoined twins to their home in the Mujib Barsho after successful separation. The premier joined the programme virtually from her official Ganabhaban residence. – PID PHOTO

A function titled ‘Rabeya, Rokeya return home in Mujib Barsho’ was arranged at the Combined Military Hospital (CMH) in Dhaka on Sunday on the occasion.

Chief of Army Staff General Aziz Ahmed completed the process of issuing release for Rabeya and Rokeya on behalf of the Prime Minister.

Speaking on the occasion, the Prime Minister said, “Today Rabeya and Rokeya are returning home. They’ll play and laugh around their parents. It’s really a big achievement.”

“The successful surgical operation during the celebrations of the Mujib Barsho and the golden jubilee of independence is really a big achievement for Bangladesh,” she said.

Noting that a total of 48 operations were conducted during the separation process of the conjoined babies, Sheikh Hasina said it was a rare surgery and new experience for Bangladesh.

On August 1, 2019, the conjoined sisters were separated through a 33-hour critical operation with the participation of 100 physicians from Bangladesh and 34 others from Hungary.

The Prime Minister said she took the initiative for the separation of the conjoined babies after her younger sister Sheikh Rehana informed her of them seeing a newspaper report. “Today is really a day of joy and a pleasant feeling for me…their successful return to home in this month of March and the Mujib Barsho is a matter of joy for all,” she said.

She also talked to the five-year-old babies and they also greeted her, saying ‘Assalamualaikum.’

Sheikh Hasina expressed her sincere thanks to the country’s doctors, Hungarian physicians and all other people and institutes who were engaged in the operation for working with sincerity for the separation of the conjoined twins. “You’ve done an absolutely humanitarian work…. you’ve done it with courage and got success,” she said.

She said this successful surgery not only marks the advancement of medical science in Bangladesh but also demonstrates the democratic government’s commitment to the people.

The Prime Minister further said on the day of Rabeya and Rokeya’s happy return to home, the pledge of the birth centenary of Father of the Nation Bangabandhu Sheikh Mujibur Rahman will be to fulfil the basic needs of every citizen of Bangladesh like them.

She also directed to ensure so that the twins can avail themselves of all kinds of medical services at government hospitals, including the CMH, free of cost.

Meanwhile, the CMH Dhaka has already issued ‘Lifetime Medical Service Card’ for the two children following the instructions of the army chief.

The Prime Minister thanked all concerned, including the army chief, for carrying out this noble task under the overall supervision of Bangladesh Army.

The ceremony was attended by senior army officers, military-civilian and foreign doctors involved in the treatment of Rabeya and Rokeya and their family members.

With this successful surgery, a new horizon was opened in the medical service, adding another milestone to the implementation of the Bangladesh Army’s development vision Forces Goal-2030.

There are very few examples of success in the detachment of such twin-headed babies. This decontamination operation is the 17th successful operation in the world and the 1st in Bangladesh, which is a milestone for medical science in Bangladesh.

On July 16, 2016, the conjoined twins were born in Pabna. Their parents are primary school teachers -- Taslima Khatun and Rafiqul Islam.