Six injured as the gantry comes crashing down 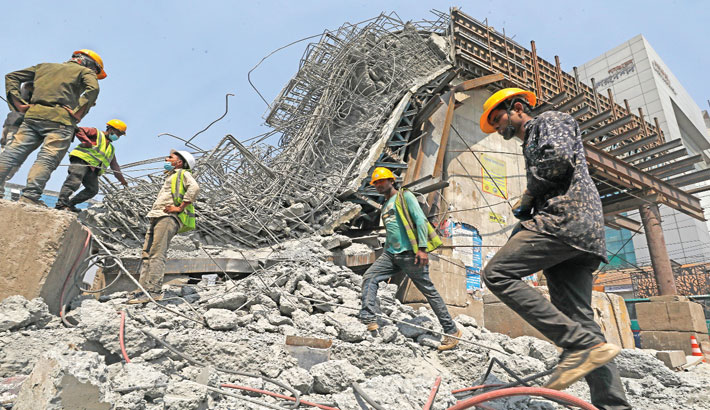 A pier cap of Bus Rapid Transit (BRT) project collapses in front of a market in the capital’s Abdullahpur area on Sunday. – Kamrul Islam Ratan

A portion of a girder launcher and a pier cap of the Bus Rapid Transit (BRT) project collapsed in the capital on Sunday, sending shivers down commuters’ spines.

Although no one was injured in the pier cap collapse that took place at Abdullahpur in the early hours, six workers, including three Chinese citizens, were injured when the girder launcher came crashing down in the Airport area in the morning.

Commuters escaped both the incidents that could have major fatalities, many pointed out.

The launching gantry, a type of crane used for construction, collapsed near Hazrat Shahjalal International Airport around 10:15am, said police.

“A crane of the BRT project collapsed near the airport. A total of six workers were injured in the accident. Of them, three are Chinese workers while three are locals,” said Inspection (Investigation) of Airport Police Station Mohammad Kaikobad.

A witness said he saw dust flying after a big bang. He later realised that a girder launcher had collapsed.

Fire service and police personnel rushed in after the accident. However, there was no obstruction to traffic on the busy road.

The launching gantry collapsed during the installation of a girder, said Station Officer Shafiqul Islam of Kurmitola Fire Station.

Three of the injured were taken Evercare Hospital Dhaka and the rest to the National Institute of Traumatology and Orthopaedic Rehabilitation, popularly known as Pangu Hospital, he said.

Sub-inspector Sumon Parvez, who went to the hospital along with the workers, described the condition of a Chinese worker as critical.

Witnesses said the girder launcher suddenly collapsed while the installation work was in progress, trapping some workers under it.

The workers were later rescued with the help of police and taken to hospital.

The witnesses also alleged that there was lack of safety gear at the project site. Even the hospitalisation of the injured workers was delayed as there was no vehicle to carry them.

In a separate incident, a pier cap of the same BRT project collapsed in front of a market in Abdullahpur around 2:30am.

However, there was not report of any injuries in the incident.

Confirming the matter, the project director said the exact reason behind the incident could not be known immediately.

The pier cap was moulded on Saturday night and it collapsed as its support was displaced at some point, he said.

Prof Md Hadiuzzaman of the Department of Civil Engineering at Bangladesh University of Engineering Technology (Buet) finds faults in the construction process. “When a girder of a big structure collapses this way under its own weight, it raises questions about the design and quality of the concrete mixture used for it.”

He also said an investigation must be launched on the quality of materials like cement, sand, stone chips and reinforcement and design.

“The authorities concerned must ensure the quality of the rest of the girders through either non-destructive or destructive test as those were moulded at the same yard. Other girders might be weak but sustained somehow,” Prof Hadi added.

If the rest of the girders are not tested, more fatal accidents may happen when vehicles will run over those, he warned.