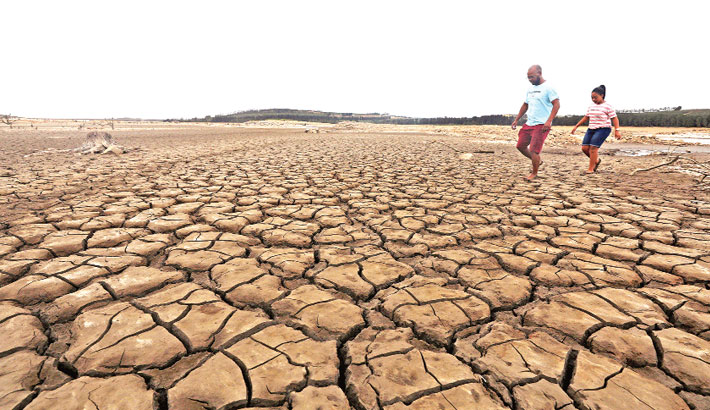 Water is essential for our survival. Water covers about 71 per cent of the earth's surface. But about 97 per cent of this water is saline and the remaining 3 per cent is soft drinkable water. Two-thirds of this 3 per cent water is in the form of ice, which is not easy to obtain. So, for several reasons, most of the continents and countries across the world having different seas and oceans, at present are suffering from drinking water crisis. Some part of earth has already run out of ground water when several parts of the world are facing acute water crisis. More than half the world’s population endures extreme water scarcity for at least one month a year. According to various studies, by 2025, about 1.6 billion people around the world will suffer from acute water crisis. According to data from a journal published in Nature in 2010, about 80 per cent of the world's people live in areas where water security is threatened. The demand for water is growing at almost double the rate at which people are growing in the world. It is estimated that by 2040, about 20 countries and by 2050, about 5 billion people will face severe water crisis.

The Consultative Group of International Research has listed several countries facing water crisis. At the top of the list are North Africa, the Middle East, India, Central Asia, China, Chile, Colombia, South Africa and Australia. Several states in India are facing severe water crisis. In Uttar Pradesh one has to walk mile after mile in search of just a little pure drinking water. Groundwater levels in several Indian states have plummeted. Water levels have also dropped in some northern districts of Bangladesh. The amount of salt in the water is constantly increasing in the southern districts of the country including Khulna, Satkhira and Bagerhat.

These bleak statistics raise a startling question – are we running out of clean water? Absolutely not. Earth can’t run out of freshwater because of water cycle, a system that continuously produces and recycles water. Water is being rapidly depleted by humans but slowly replenished by rain and snowfall. This limited supply is not distributed evenly around the globe. Diverse climate and geography provide some regions with more rainfall and natural water sources, while other areas have geographic features that make transporting water much more difficult. So, this is not really a question of how much water there is, but of how much of it is accessible to us.

Agriculture accounts for 70 per cent of all water withdrawals globally. Agriculture currently covers 37 per cent of earth’s land area, posing the biggest threat to our regional water supplies. So we have to take initiatives to reduce water uses in agriculture. Scientists are already finding ingenious ways to reduce water usage in agriculture like using special irrigation techniques to grow “more crop per drop” and breeding new crops that are less thirsty. On a personal level reducing food waste is the first step to reducing water waste. On the other hand, by conserving rain water, we can meet a lot of our water needs. When 1 inch of rain falls on a 1000 square feet roof area, about 600 gallons of rainwater accumulates which can be collected in underground rainwater storage. It is not a good idea to let this huge amount of rainwater flow away into the drains unused. Bermuda, a coastal country, is a case in point. Surrounded by saline water, the country meets almost all of its water needs by conserving rainwater. Recycling of waste water is also a better option to reduce wastage of water. Desalination of water could be a better alternative but it is costly and it requires more energy. So for good reason we should focus on water conservation and reuse.

Due to severe water scarcity cross border conflicts over water could rise 95 per cent by 2119. So we need to be aware of this and take appropriate actions immediately. The fear that different countries of the world will not get involved in the war in the face of acute water crisis cannot be completely dispelled. Many agree that countries in water crisis could become embroiled in water disputes in the future. Water was one of the regulators of the 1967 Arab-Israeli war. There are disputes between Iran and Iraq over the Shat-al-Arab River. India-Pakistan, India-China and India-Bangladesh have problems with water sharing in several rivers. China is building a dam on the Mekong River. As a result of the construction of this dam, in the countries of Southeast Asia (Vietnam, Laos, Cambodia and Thailand) there will be water crises in the future. This could lead to a deterioration in China's relations with Southeast Asian countries, which could lead to increased instability in the region. Thus, if countries get involved in water-centric disputes, it will have dire consequences. There are already conflicts between different countries over the distribution of water in the rivers located in different countries of the world. This problem will increase if the water crisis is manifested in the future. Powerful states will want to claim control over various soft water sources. This will lead to increased instability around the world. In this context, the possibility of a third world war cannot be ruled out. In 1995, the then Vice President of the World Bank Ismail Serajedin stated, “The wars of this century were fought over oil. The wars of the next century will be fought over water, unless we change our approach to managing this precious and vital resource.”

Afsana Rezoana Sultana is a