UK policeman in elite unit charged with murder of woman 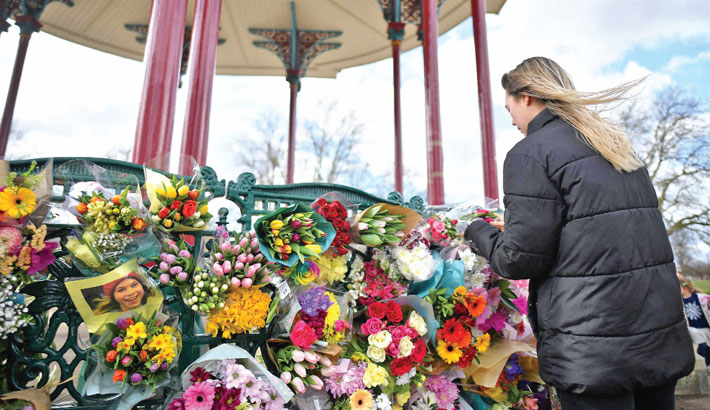 A well-wisher places flowers at a band-stand where a planned vigil in honour of murder victim Sarah Everard was cancelled after police outlawed it due to Covid-19 restrictions, on Clapham Common, south London on Saturday. —AFP PHOTO

LONDON: London police on Friday charged a fellow officer with kidnap and murder, hours after confirming a body discovered in woodland was that of a missing woman in a high-profile case that has shocked Britain, reports AFP.

She vanished while walking home in south London on the evening of March 3, with Couzens’ arrest a week later sending shockwaves through the Met—and the wider public—and triggering an angry debate about women’s safety.

“Following a referral of evidence by the Metropolitan Police related to the death of Sarah Everard, the CPS has authorised the police to charge Wayne Couzens with murder and kidnapping,” Rosemary Ainslie, of the Crown Prosecution Service (CPS), said in a short statement.

Couzens, who was first arrested late Tuesday in Kent, southeast England—where he lives and Everand’s remains were found the following day—is due to appear Saturday at Westminster Magistrates’ Court.

His charging came several hours after police confirmed that the body, found in an area of woodland in Ashford, Kent, late Wednesday had been identified as Everard.

Officials also revealed Couzens had again been admitted to hospital Friday with a head injury, a day after being briefly hospitalised for a similar injury sustained while “alone in his cell”.

The Independent Office for Police Conduct (IOPC), a watchdog dealing with policing complaints, is probing the Met’s handling of the case, including how Couzens ended up requiring hospital treatment.

The IOPC watchdog has said it will also probe whether Met officers responded appropriately to an accusation of indecent exposure against him, which occurred several days before Everard disappeared.

He was alleged to have twice exposed himself at a south London fast food restaurant on February 28.

Police said their investigation remained ongoing, and was “drawing on expertise and skills from hundreds of colleagues across the Met”.

The case has sparked widespread anger in the UK, with lawmaker Jess Phillips on Thursday reading out the names in parliament of 118 women and girls killed in Britain in the last year.

“Dead women is a thing we’ve all just accepted as part of our daily lives,” said Phillips, reading the names of victims whose killings involve a man charged or convicted.

In an unusual step, which the Met said it was taking “in the interests of clarity about these exceptional events”, officials disclosed details about Couzens’ employment.

He joined the Met, Britain’s biggest police force, in September 2018 and was posted to a response team covering parts of southeast London.

He then moved to the parliamentary and diplomatic protection command, an armed unit, in February last year.

“His primary role was on uniformed patrol duties of diplomatic premises, mainly a range of embassies,” police said.

Meanwhile vigils planned for Saturday in south London and elsewhere to honour Everard were thrown into doubt Friday after a High Court judge declined to rule on the legal right to protest under coronavirus restrictions.

Reclaim These Streets, a volunteer collective planning the socially-distanced events, urged police to work with organisers to ensure it could go ahead.

But the Met said the judge had reaffirmed the police’s right to conclude that large gatherings were currently unlawful and urged people to “find a lawful and safer way to express your views”.”