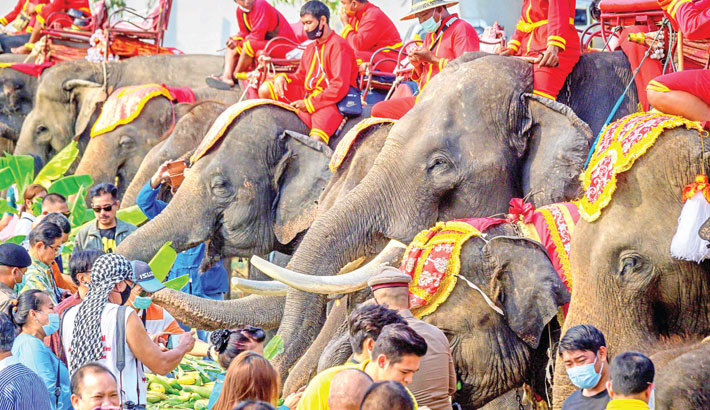 Mahouts bring their elephants dressed to commemorate National Elephant Day for a festive breakfast of various fruits and vegetables at the Elephant Royal Kraal Village in Ayutthaya on Saturday. —AFP PHOTO

AYUTTHAYA: Thailand held a fruit banquet for dozens of elephants in the ancient capital Ayutthaya on Saturday, continuing an annual event which has been a big draw for foreign tourists in the hope they will return soon and revive the key tourism industry, reports Reuters.

The feast marks the country’s Elephant Day, celebrating elephants as a source of national pride and cultural identity for Thailand throughout its history, used for labour, transport and in battlefield triumphs by warriors and kings.

“We, the elephant people, are hoping that the government will open up the country (soon) to welcome foreign tourists in order for them to bring in income so that we can pay for the elephant food and compensation for their handlers,” said Ittipan Kharwlamai, General Manager of the Royal Elephant Kraal and Village, an elephant camp, located north of Bangkok.

“We hope that tourists will help us and all 3,800 (domesticated) elephants to survive,” he said.

The tourism-reliant country has yet to lift a travel ban imposed last April to curb the outbreak, keeping most foreign travellers and investors away.

Southeast Asia’s second-largest economy suffered its deepest slump in over two decades last year, when the number of foreign visitors plunged 83% from nearly 40 million in 2019.

Animal rights groups have long been calling for the elephant camps in Thailand to end animal shows and rides, branding the shows a form of animal abuse.