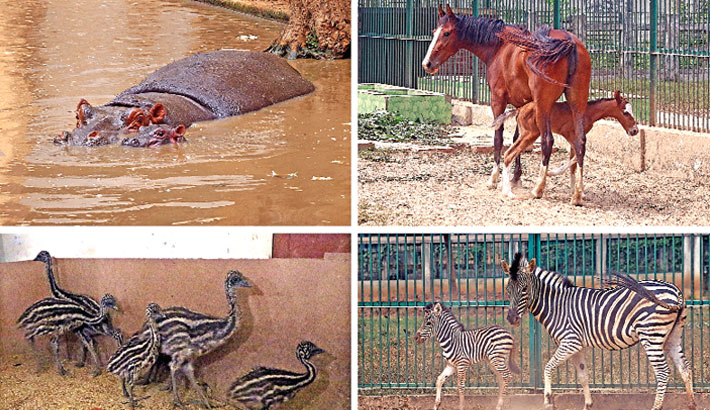 The National Zoo in the capital has got babies of four animals in just 15 days. The photo taken on Friday shows that the babies of hippopotamus, horse, emu and zebra are growing up along with their mothers. —Md Nasir Uddin

Bangladesh National Zoo has been blessed with a number of newborn animals which has variegated its bouquet to greet visitors.

Around 30 animals, including deer, zebra, hippopotamus, ostrich, horse, peacock and emu, have given birth to their babies since the zoo reopened on November 1 last.

According to the zoo authorities, they have got four newborn animals second time in 15 days.

Earlier, some 115 baby animals were born in nearly eight months of the shutdown due to the coronavirus pandemic.

Zoo Curator Md Abdul Latif said, “There had been a record spike in animal births at the zoo during the closure in the early months of pandemic. Favourable environment boosted their breeding. We’re still enjoying the benefits of that shutdown. There’re more animals that will give birth to new babies and we’re taking care of them.”

Visiting the world’s 4th largest zoo in terms of area (186.60 acres) on Friday, this correspondent found that the zoo with 2,700 inmates of 191 species returned to normalcy.

Thousands of visitors flocked to the zoo located in the capital’s Mirpur area and got entertained on the day.

Zoo staffers working there in two shifts said their work has increased since the reopening of the zoo.

Md Shuruj Mia, one of the caretakers, said the inmates in the National Zoo passed an excellent time during the lockdown as there was no one to disturb them.

Actually, the zoo animals are habituated to the arrival of large visitors here and now, they are returning to their normal life, he said.

On the right side of the curator’s office, a few newborn spotted and sambar deer were seen in their moats. Some of the visitors were offering them grass.

Beside the north lake of the zoo, saltwater crocodiles and hippopotamuses were bathing in separate reservoirs where a newborn hippopotamus was seen.

Peacocks, ostriches and emus are kept in several cages in the middle of the zoo. And a number of newborn chicks of emus were found there.

Ostriches were seen eating roots and seeds and a number of emus were taking care of their hatchlings there.

Asked about what steps have been taken by the zoo authorities to help the inmates cope with the post-shutdown situation, Latif said, “We’ve been trying to make visitors aware by informing them of the dos and don’ts in every 15 minutes so that they don’t poke the animals. Yet some visitors throw different things and annoy the animals. Our mobile teams always monitor visitors’ movement and prevent them from doing harmful activities.”

“You can see many of our visitors throw the peels and packets after eating peanuts, chips and other food items. We request them to behave responsibly as it’s almost impossible to clean the whole zoo of 186 acres with 4-5 cleaners,” he added.