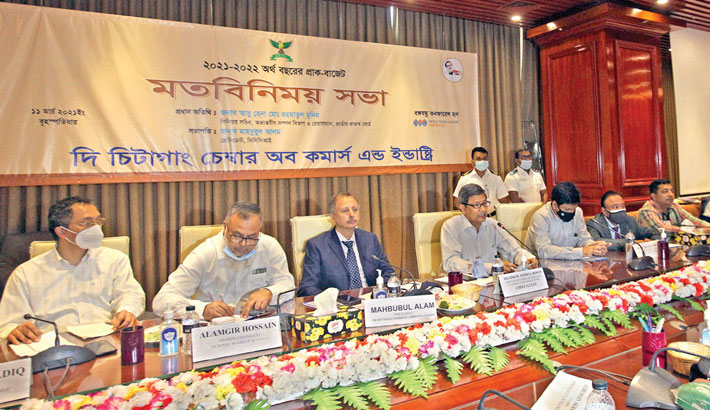 NBR chief Abu Hena Md Rahmatul Muneem urged the businesspeople to work together on the matters.

“Automation is being introduced in the processes of revenue collection for the transparency and development of the country as well,” he added while addressing a pre-budget views exchange meeting as the chief guest with Chattogram Chamber of Commerce and Industry (CCCI) at Bangabandhu Conference Hall of World Trade Centre (WTC) in the port city on Thursday.

At the meeting, the NBR chairman said sometimes the taxation “creates confusion among the tax payers.”

“The main aim of imposing tax is not only earning revenue but also to facilitate expansion of local industries, boost agricultural production and protect environment,” he said. Laying importance on being self-sufficient in

producing the commodities like onion and rice, NBR chief said, “Taxes are also imposed to ensure food security and protect the local products.” Replying to an appeal of a businessman, he said the import of used lubricants was stopped for different reasons.  “Bangladesh cannot be made dumping           place for used lubricants of the world. Refined lubricants cause damage to equipment and environment as well,” said Abu Hena, also senior secretary at the Internal Resources Division.

Terming the country’s tourism sector as a potential one, he emphasised increasing revenue collection from the sector. He sought help of the business community of Cox’s Bazar in the matter.

Urging all to come out of the fear of the Covid-19, he said, “We have passed the crisis period as vaccines are available now.”

Abu Hena informed that an application “Data Verification System (DVS)” has been developed in cooperation with the concerned department for ensuring transparency in company auditing system.

“As much as revenue will come, the rate of the tax and duty can be reduced,” he observed.

“We have a target for earning revenue for development of the country and keep the targeted growth continue,” he added.

CCCI President Mahbubul Alam placed a plethora of proposals for the upcoming budget of the fiscal 2021-22.

He demanded setting up of a circuit bench of High Court for faster resolving of the cases related to income tax, VAT and duty.

The CCCI president hoped that the next budget will be placed prioritising the steps for poverty reduction, creating employments, increasing investments and earning more revenues.

The businesspeople also came up with demands and proposals for easing trade and commerce of the country at the meeting.

The NBR chairman also attended another pre-budget discussion with Chattogram Metropolitan Chamber of Commerce and Industry (CMCCI) at its office.