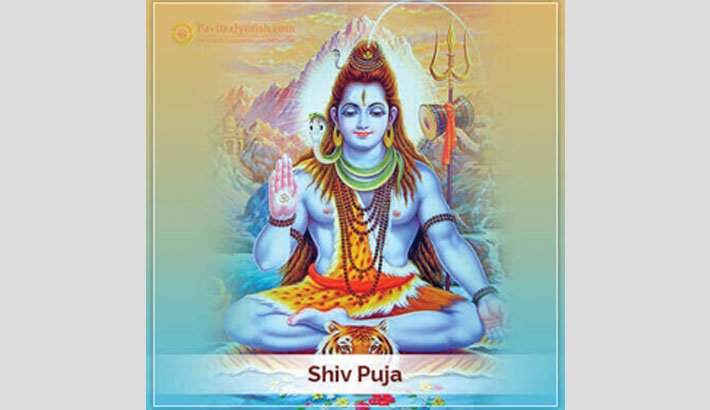 Shivratri is a major festival of the Hindu community which is celebrated annually in honour of Lord Shiv, third (as believed by the members of Hindu community) of the trinity. This solemn festival marks the overcoming of darkness and ignorance in life and the world. It is observed through remembrance of Shiv and chanting hymns, fasting, and meditating on ethics and virtues like honesty, truthfulness, benevolence, good behaviour, charity, forgiveness and broadness et cetera.

Ardent devotees keep awake throughout the night, visit Shiv temples or go on pilgrimage to Jyotirlingams.

Mythology says that Lord Shiv and Parbati (Durga) got married at this night, but so what? Trillions of people have got married in this world since creation. Then, why this night is so majestic? It is said that at this night planets and stars get so closely associated in northern hemisphere that human beings can awake their spiritual power and get relieved of their sins.

The name itself clarifies that it is a festival of night whereas many other festivals (except Laxmipuja in the evening and Kalipuja at midnight) of the Hindu community are observed during daytime. Then what is the reason of holding this festival at night? During dark fortnight, the moon gradually becomes thinner which increases inferior qualities among human beings. As embankment is to be constructed ahead of flood, similarly scripture suggests worship of Lord Shiv before increase of that bad instinct i.e. the moon becomes fully extinct. Creation and destruction is a continuous process in life cycle in the universe. In the month of Falgun, trees become leafless, look dead, but within a few days new leaves grow. Similarly, in the process the new shape of creation in nature begins in this unique period. At this night, we are at the middle of destruction and regeneration which is just like interval of a film.

Shiv is a very unique character. Among the trinity, Brahma has lost his position and importance long ago. He is now staying in the lone Brahma temple at Pushkar (Rajsthan, India), Position of Vishnu is not much better. Though king of gods Indra, has become simply the suffix of some names like Narendra, Mahendra, Jeetendra et cetera.  No information of Indra temple is available, but the place of Shiv is very strong. His territory (temple) is extended from Lake Manash of Tibet to India, Pakistan, Nepal, Sri Lanka and Bangladesh. Outside this sub-continent, Shiv temples have been established in many countries like Indonesia, Malayasia, Australia, New Zealand, the United States, Switzerland, Oman, South Africa and the Netherlands.

Shiv is not a Vedic god like Varun or Indra, but Shivratri is a popular festival. Shiv has been referred to in Purans like Shivpuram. Skandapuran, Chaitanyapuran and Vayupuran et cetera. In these texts, the glory of Shiv has been explained, but not particularly Shivratri. John Mardoc compiled the collections of Wilson, Kruk, Huse and Wilkinson about the festivals of India. About Shivratri, he wrote in 1906 that many gods may be ancient, but the procedure of worship may be recent. For instance, Ganesh Chaturthi in Mharastra and Durgapuja in Bengal. Shivratri has been mentioned in Hindu Manners, Customs and Ceremonies (by Henry King Beauchamp, a British clergyman) published in 1906.

The origin of this festival can not be ascertained clearly, but it is an old tradition of around 200 years. Shivratri is observed at the 13th or 14th night of dark fortnight in the Bengali month of Falgun. In fact, in every luni-solar month of Bengali calendar, there is a Shivratri, but the last one in Falgun is the most important of all. For this reason, it is known as Maha Shivratri (grand night of Lord Shiv). The day is fixed, but as Bengali almanac is followed the date is changed every year.

Worship of Shivalinga is an important part of Shivratri. It is a symbolic representation of formless Shiv. This worship includes offering bilwapara (leaves of wood apple) and flowers.  Three leaves of wood apple stay together which symbolises three aspects of human beings - raja (for activity), tama (that brings inertia) and sattva (that brings positivity). Surrendering these three aspects to the Divinity through bilwapatra brings peace and freedom of the soul.

There are some scriptural provisions regarding worship of Shiv. Though this festival is held at night, devotees have to wake up at dawn and complete their bathing. It is better to bathe in the Ganges, because the Ganges is considered as a sacred river by the members of Hindu community. When the scripture was written this observation was justified, but at present the Ganges is one of the most polluted rivers in India. Therefore, bathing at home is safe and hygienic.

After the worship, intake of food heavily and long journey should be avoided. A vegetarian dish should be preferred. Devotees go on fasting and offer rice to Shiv. Women use turmeric for beautification, but intact turmeric should never be used. Never draw tilak (a mark on the forehead) with vermilion, but always with sandal paste. Pour milk and pure (if available) Ganges water, but never coconut water. To remain free from evil force, never use broken rice. Those who cannot maintain total fasting nay drink light beverage (sharvat). If not worshipped scripturally misfortune may appear.

Beyond scripture and devotion, Shiv is also important practically. Legend says that gods and demons were always at daggers drawn towards each other. However, in a rare event of solidarity, being advised by Lord Vishnu, they churned the Ocean of Milk together for nectar to achieve immortality. The first thing that came out of it was poison that made the whole creation almost dead. They prayed to Lord Shiv to save them. Shiv drank all the poison and saved creation, but his neck became blue at the heat of that terrible poison. It signifies that superiors should always protect their juniors from danger. It is very difficult to believe that how does a person wearing just a tiger skin can stay in bone-chilling cold of the Himalayas.  It gives us the lesson of remaining satisfied with the minimum which was echoed through Socrates - “How many things I can do without!”