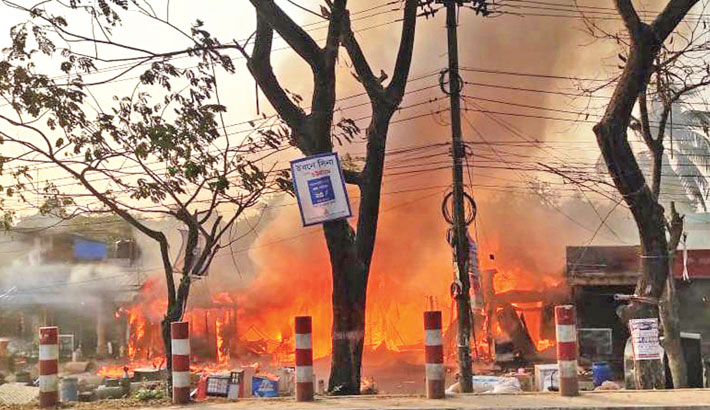 Shops going up in flames and a huge cloud of dark smoke engulfs Madunaghat Bazar in Chattogram on Thursday. SUN photo

CHATTOGRAM: At least seven shops and nine abandoned buses were gutted in separate fire incidents in the city on Thursday.

Sources in the Fire Service and Civil Defence (FSCD) department said the fire originated from an electrical short-circuit at a tin-roofed shop in Madunaghat Bazar at around 5:30pm. It spread fast engulfing six other adjoining shops of different items within a short time.

On receiving information, two fire fighting units from Kalurghat Fire Station rushed to the spot and doused the fire after around one hour of frantic effort.

On the other hand, nine abandoned buses of ‘Bagdad Express’ were also gutted in a fire at their depot in the city’s Colonel Hat area around 1:30pm.

Five fire fighting units extinguished the fire at around 2:30pm, said the sources concerned. Reason behind the fire and damages in it will be estimated after investigation, they added.