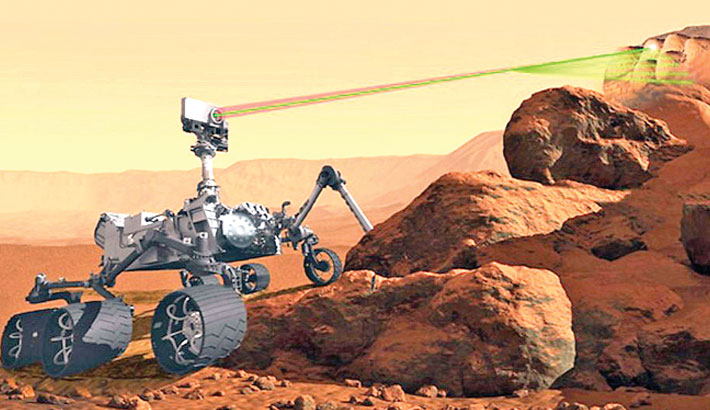 So, now we know what a laser sounds like on another world.

The US space agency's Perseverance rover has deployed its SuperCam instrument on Mars for the first time, reports BBC.

This high-intensity light probe can identify rocks at a distance. It's a technique that was also employed by Nasa's previous rover, Curiosity.

But Perseverance has some enhancements, including a microphone that allows us to actually hear the laser at work. This isn't just some nice-to-have feature, a gimmick for PR purposes,

but provides extra information that is useful to scientists. The sound of the laser hitting rocks reveals knowledge such as the hardness of the targets being investigated.

In a media briefing on Wednesday, Dr Murdoch played three different sounds recorded by the SuperCam microphone. One was of the general sound of Mars, the second was of some wind gusts, and the third was the staccato pops from the laser in action.

Perseverance landed in Mars' Jezero Crater on 18 February to search for evidence of past life. The deep bowl is regarded as an excellent location for such a quest because it almost certainly held a lake billions of years ago; and where there's been water, perhaps there's been life, too.

The SuperCam instrument was developed in a partnership between French and American research teams.

Its first rock target selected for study was dubbed "Máaz", which means Mars in the Navajo language spoken by Native Americans in the southwestern United States.

Máaz was found, to no-one's real surprise, to be basaltic in nature. Basalt is very common on Mars.

It's a rock that contains a lot of magnesium and iron, and is the sort of thing that forms from rapidly cooled lava.

"We don't know yet if this rock itself is igneous, ie volcanic, or perhaps if it is a sedimentary rock made up of igneous grains that were washed down river into Jezero lake and cemented together," said SuperCam principal investigator Roger Wiens, from Los Alamos National Laboratory in New Mexico.

"We'll have to use more of our techniques and study the surrounding area to understand those details some more."

Perseverance has spent most of its first three weeks on Mars going through post-landing checks. It has, though, started driving in a north-easterly direction.

An immediate goal is a helicopter experiment. The rover brought a small chopper with it from Earth.

The vehicle is looking for a suitable stretch of terrain where the 2kg device, called Ingenuity, can be put safely on the ground. At present, the aircraft is slung beneath Perseverance's belly.