Three killed as bus goes up in flames 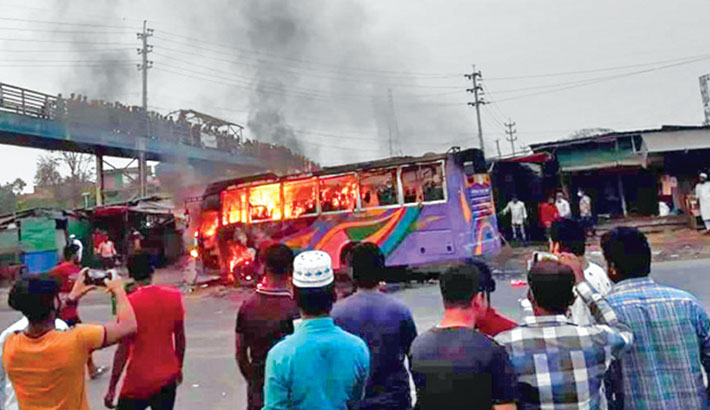 At least three passengers were killed and 20 others injured when a bus caught fire in Daudkandi upazila of Cumilla on Thursday evening reportedly following a gas cylinder explosion.

Nine of the injured were sent to the burn unit of Dhaka Medical College Hospital (DMCH) in the capital while two were taken to Daudkandi Health Complex and six others given first aid.

Police and witnesses said the Matlab-bound ‘Matlab Express’ bus from Dhaka burst into flames near Gouripur bus stand on the Dhaka-Chattogram highway around 6pm.

On information, firefighters from Daudkandi

Fire Station rushed in and brought the blaze under control.

Resident Medical Officer of the upazila hospital Dr Mohammed Jamaluddin described the condition of most of the injured as very critical.

The accident also led to the suspension of traffic on the busy highway, creating a long tailback and causing sufferings to commuters.

Officer-in-charge of Daudkandi Highway Police Station Zahirul Haque said they recovered the bodies and were trying to bring the vehicular movement on the highway to normalcy.

Incidents of fire in motor vehicles are nothing new in the country. Such incidents often take place in the capital and other parts of the country.

Recently, a BRTC double-decker bus caught fire in Arambagh area of the capital due to a technical fault.

The Department of Explosives and Rupantarita Prakitik Gas Company Limited said the gas cylinders may cause fatal accidents anytime if they are flawed. According to the CNG Policy 2005, CNG-run vehicles must have their cylinders checked every five years. They should be replaced with new ones if any flaw is identified.

On Jul 17 last year, three people died in Tangail after the gas cylinder of a microbus went off and another person died in a cylinder blast in an auto-rickshaw in Noakhali.