Bangabandhu in a Different Light 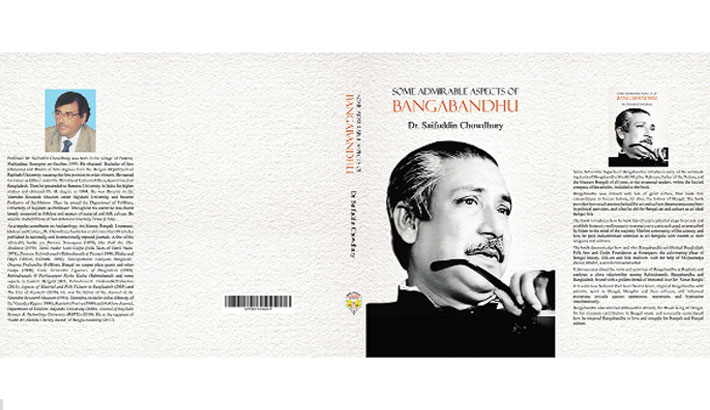 Is the greatest Bengali of all time Father of the Nation Bangabandhu Sheikh Mujibur Rahman all about politics? The answer is surely negative. So what else was he? Oh! He was many things. A father, a husband, a grandfather, a brother and all the relations there can be. But wasn’t he something more than that. We often puzzle ourselves in thinking the following. Do great politicians listen to music? Do they love poetry? Do they sometimes feel blank while alone? These are natural human emotions and our Bangabandhu had all of them. He was a good literary enthusiast, a good orator of poetry, an avid listener of music, a great admirer of art. We have one book in hand that delineates all this to the readers. His undisputed passion for Bengali literature, art, culture and religion, unwavering devotion and unique contribution finds a place in Dr. Saifuddin Chowdhury's book “Some Admirable Aspects of Bangabandhu”. That Bangabandhu was proud, as an individual can be, to introduce himself as a Bengali is exquisitely depicted in the book. The writer opines that Bangabandhu gave utmost importance to the inseparable relationship with the soil and people of this country. He took comfort in embracing Bengali culture.

Seeing his dear Bengalis being helplessly exploited, tortured and oppressed, Bangabandhu struggled all his life against oppression. He wanted the Bengalis to live in an independent sovereign country with a Bengali identity, with smile on their faces. He wanted nothing more. He did not hesitate to express his gratitude to those who inspired and supported him in numerous ways in creating this feeling. On the other hand, he never compromised with those who created obstacles. He struggled all his life leaving behind all earthly comforts.

That is why Bangabandhu is considered by some as 'Himalaya', by others as 'Poet of Politics', by some as 'Greatest Bengali of All Times', by Bengalis as 'Bangabandhu', and in the eyes of Bengali nation 'Father of the Nation'. No matter what title he is given, no title is enough to reveal his full identity.

Bengali identity is rooted in its traditional literature, art and culture. Talking about Bangabandhu, Dr. Chowdhury opines in his book, “Bangabandhu is endowed with innumerable great qualities which made him unique not only in the history of Bangladesh but also in world history. The book presents Bangabandhu’s deep passion for Bengali literature, art and culture and his important contribution as an ideal Bengali in spite of his busy hours in political activities.”

Dr. Saifuddin Chowdhury is one of the acclaimed faces in the field of literature, art and culture. He has published numerous research articles and books in Bengali and English at home and abroad. The Bangla Academy has also published many of his books. Early Terracotta Figurine of Bangladesh by the same author received congratulations from scholars home and abroad. His objective and informative book The City of Rajshahi published by the Rajshahi Association has been widely acclaimed by English-speaking readers. He has made admirable contributions to various fields of Bengali literature, folklore, history, tradition, art and culture.

So for good reason, from Dr. Chowdhury's keen eyes, it is expected that Bangabandhu's contribution to Bengali literature, art, culture and religious thoughts and actions will not be avoided. The writer attempts to unfold some admirable aspects of Bangabandhu in this book with a view to presenting him in the international arena in the auspicious event of Mujib Year. In writing the book, the author has made a wise and careful selection of, besides the relevant political figures, all the artists and writers who have directly influenced Bangabandhu’s unique psyche, all who have collaborated directly, whom he has repeatedly remembered with respect and tried to reciprocate with gratitude. With objective and authentic information, Bangabandhu's deep affection and unforgettable contribution towards art, literature and culture finds an experienced voice in an orderly manner.

Written in seven chapters,the first chapter of the book while giving a brief overview of Bangabandhu's personal and colorful political career, sheds light on the flow of his thoughts and work on Bengali language, literature culture. Childhood, political involvement during student life, anti-British movement, language movement, anti-Pakistani dictatorship movement, independence movement, war of the independence and reconstruction of war-torn independent Bangladesh and establishment of its international image are the predominant topics in this initial chapter.

The second chapter describes the guidelines and steps taken by Bangabandhu for the reform and prosperity of the religious culture in Bangladesh. Bangabandhu declared the free voice and practice of all religions including Islam, Hinduism, Buddhism and Christianity in secular Bangladesh. At the same time, he issued a stern warning about the frightening practice of religious business in the name of religion. This chapter also highlights some OTHER remarkable reforms directed by the Father of the Nation which includes the Establishment of Islamic Foundation, subsidy for Hajj pilgrims, establishment of Madrasa Education Board, arrangement of recitation of the Holy Quran on radio-TV, announcement of public holidays in religious festivals, ban on alcohol, gambling, horseracing, anti social activities, allotment of land in Tongi for Biswa Iztema.

Chapter 3 describes why and how Bangabandhu with the help of internationally renowned maestro artist Zainul Abedin founded the Bangladesh Folk Art and Craft Foundation in Sonargaon, the heart of the history and tradition of folk art of the nation.Adding this surprising and important point, the author has unveiled a special image of Bangabandhu to the readers.

The fourth chapter of the book gives a detailed account of the several visits Bangabandhu paid to the glorious city of Rajshahi and what he did there. May be, the most important addition to this chapter is Bangabandhu’s full speech at a huge public meeting on 9 May 1972 at Madrasa Maidan in Rajshahi. The author translated the speech into English, considering its historical value as a document of time. The sublime translation will surely impress the reader.

The author thinks that Rabindranath, Bangabandhu and Bangladesh are embedded in the golden thread of love. This golden bond finds a narration in detail in the fifth chapter of the book. The sixth chapter discusses how the communist and rebellious spirit of the rebel poet Kazi Nazrul Islam influenced Bangabandhu and how Bangabandhu evaluated the poet. Bangabandhu was an avid admirer of Kazi Nazrul Islam. The Father of the Nation felt warmth in presence of the poet. His fascination towards the poet was boundless. The author takes the opportunity to reveal this corner of Bangabandhu’s life in front of his readers. The seventh chapter holds the description of Bangabandhu’s grateful remembrance of another maestro Abbas Uddinin enriching the world of Bengali music and how he inspired Bangabandhu to preserve the Bengali language and culture.

The Rajshahi Association, a socio-cultural organization with a glorious heritage, decided to publish a book on Bangabandhu in English on the occasion of Mujib Year. The association has shown great wisdom by inviting Dr. Saifuddin Chowdhury to compose the book. This book will undoubtedly take the English readers from home and abroadone-step closer in knowing Bangabandhu from a different viewpoint. For this, the leaders of the association, especially the president and deputy commissioner of Rajshahi Abdul Jalil and the general secretary Tasikul Islam Raja are owed special thanks.

We believe the readers with its beautiful cover, eloquent illustrations, tasteful colour scheme, glossy paper printing, international standard sublime language, heartwarming presentation, in formativeness and logical analysis will consider the book as an elite publication, a book to keep in collection.

As far as the book is concerned, it is the first attempt of a Bengali writer to write a book in English on Bangabandhu from a different and less discussed perspective. The author deserves appraisal.