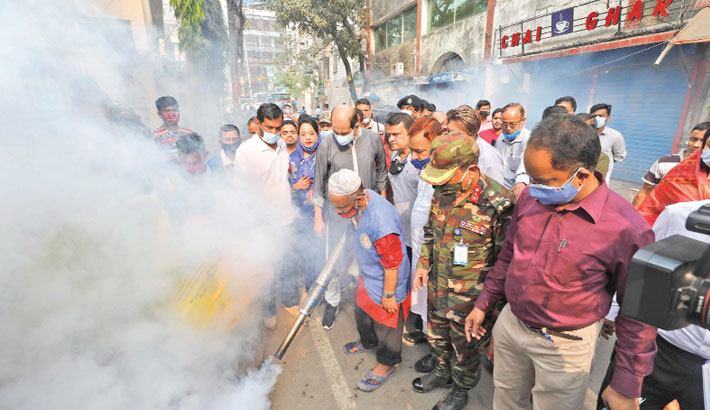 DNCC Mayor Atiqul Islam directs a worker to spray adulticide and larvicide through a fogger machine during an anti-mosquito drive near Ramchandrapur canal in the capital’s Adabor area on Wednesday. — Kamrul Islam Ratan

He also said they will introduce technologically advanced tracking system to monitor their activities.

The mayor made the remarks after visiting the activities of mosquito control workers at Suchona Community Centre in Mohammadpur on the third day of crash programme.

Mayor Atiqul said, “Monitoring the activities of mosquito control workers is a big challenge. We will introduce biometric tracking system to monitor their activities. If we can do it successfully, the mosquito menace can be stopped.”

He said that 1200 workers of DNCC will come under the surveillance of the system very soon.

DNCC Mayor also said that he was under public pressure for the rise in the mosquito population and they were trying their level best to control the insect.

“We did not set any time frame to control the menace, but we are trying to control it as soon as possible to defend us from public wrath,” Atiq added.

He also said that the drains under footpaths were the major sources of mosquito and they were spraying pesticide there.