No progress in 17 ADP projects in FY20 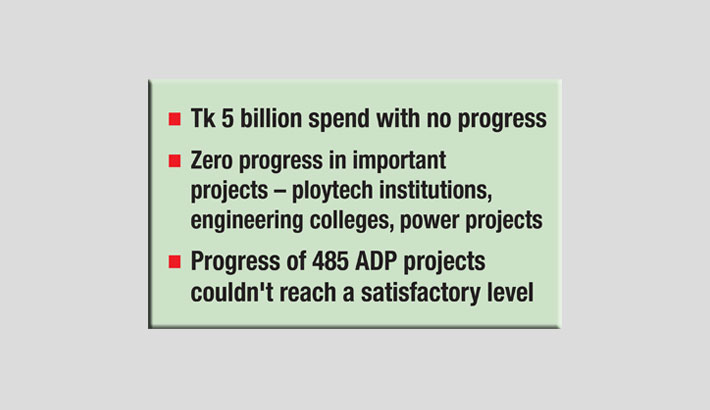 Even though a sizeable amount was spent, some ADP projects failed to make any physical progress in the 2019-20 fiscal, suggests an official review report.

A twist in development activities due to more than two months long corona lockdown is thought to have affected the projects.

In its ADP review report for FY20, Implementation Monitoring and Evaluation Division (IMED) found that 17 ADP projects failed to post any real progress though Tk 5 billion was spent on them.

In total, the progress of 485 ADP projects could not reach a satisfactory level in FY 20, according to the project watchdog.

It is a common phenomenon that a large number of projects under ADP see no progress or little progress every year even if there is no unusual situation.

“The project evaluation has been done after an investigation. The progress of the projects was zero until June 2020. The report has not considered the progress, if any, made later,” said Pradip Ranjan Chakrabarty, the IMED Secretary.

He assured that they would carry out a sector-wise review to find out the reasons behind the zero progress of the project.

“More investigations are needed to identify the reasons for holding back the project progress. We’ll investigate the projects more,” Chakrabarty added.

In this regard, IMED has already started one to one meeting and the planning minister has started issuing DO letters, he informed.

The IMED report shows that five projects of the technical and madrasa education division saw no progress although money was spent on them.

Over Tk 1.78 billion out Tk 2.40 billion allocations was spent for the project to set up polytechnic institutes in 23 districts, which at the end of the fiscal year could not yield any tangible results.

Similarly, Tk 481 million out of Tk 825 million ADP money was utilized for a scheme to set up four engineering colleges in four divisions, but with zero progress.

Technical and madrasa education division officials, however, claimed that land acquisition, consultant appointment for some of the projects have been complete, although physical work has not started.

Besides, another important project to set up four women polytechnic institutions also encountered the same problem whereas nearly half of Tk 599 million ADP money was spent.

The zero progress schemes also include some important projects like the replacement of Ashuganj old 132kVAIS substation by a new 132kV GIS substation project and the urban resilience project (DNCC part).