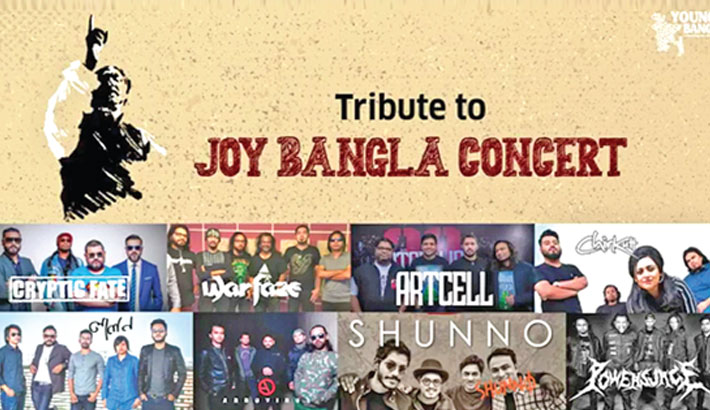 The bands that rocked Joy Bangla Concert stage in previous years reminisced about their special moments about the past episodes and rendered songs online as their concert could not be held this year due to coronavirus pandemic, reports UNB.

On its official Facebook page, Young Bangla, a leading youth platform of CRI (Centre for Research and Information), aired the virtual event featuring talks by the bands’ members, their songs, and visuals narrating the historic events that the concert is themed on.

Since 2015, Young Bangla has been featuring the Joy Bangla Concert every year paying tribute to the Father of the Nation’s historic March 7 speech.

This year the concert couldn’t be organised as the coronavirus spell is still going on. Instead, a virtual programme was organised by Young Bangla to air the vignettes shared by the bands about their past performances in the concert.

“In 2015, when Joy Bangla Concert was organised for the first time, we were really excited. We were also a bit tensed as we were the opening performers. But, when we were on the stage, we saw that the stadium was already full. It was one of the best experiences of our life,” said Emil, the vocalist of Shunno.

“The 2020 concert was very special for us as the prime minister attended it. That time we were on the stage. It was a great achievement for us,” said Ishmam, the guitarist of Shunno.

“We are a bit sad that this year the concert couldn’t be organised. But, it will definitely come back. Like Bangabandhu’s historic Joy Bangla speech that this concert is named after, we would like to say, ‘You can’t keep us suppressed’,” said Sufi Maverick, vocalist of Arbovirus.

“I thank Young Bangla for organising this concert, the biggest of its kind in the country, as it is themed on Joy Bangla, the slogan that the Father of the Nation roared out loud and that motivated us as a nation to free our country from the Pakistani Occupation Force,” said George Lincoln D’Costa of Artcell.

“The main purpose of this concert was to present the history of our independence through music. When Putul Apa and Bobby Vai (Bangabandhu’s grandchildren) accompanied us through Bangabandhu’s house before the 2016 concert, I realised the role of Bangabandhu and his family in the country’s independence and the essence of March 7,” said Sumi of Lalon Band.

“The spirit of Joy Bangla represents the spirit of the youth of the world. For us, the most memorable part was the 2018 performance of the patriotic song ‘Dhono Dhanye Pushpe Vora’,” said Sumi of Chirkutt band.

The country’s biggest concert for youths added some special features such as presenting the coloured version of the speech in 2016.

Later, in 2020, the audience had a hard time believing their eyes when they saw the Father of Nation coming alive holographic visual delivering his best speech that is now recognised by the United Nations as the memory of the World.