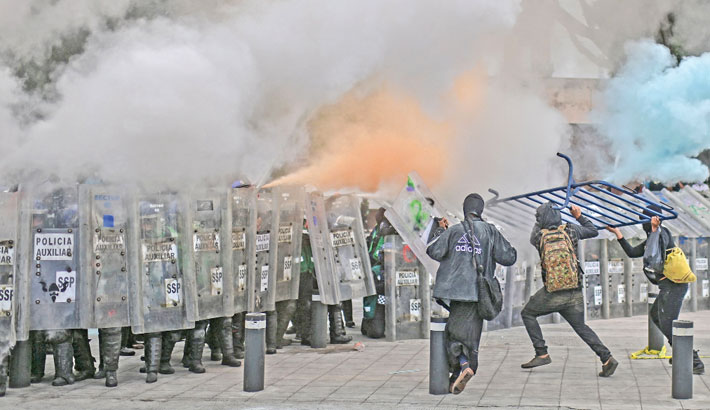 Women protesters clash with the police during a demonstration to commemorate the International Women’s Day in Mexico City, on Monday. – AFP PHOTO

Women took to the streets in peaceful democracies and in countries gripped by conflict, though in far smaller numbers than last year, when the full force of the Covid-19 pandemic had yet to hit the world.

Thousands marched in Mexico City, bringing with them photos with the names of alleged rapists, murderers and harassers of women.

“Together we are the fire, burn everything,” said one banner in the crowd, some of whom angrily kicked at a wooden fence around the Monument to the Revolution.

“My daughter was raped. I am grateful that she is alive,” 45-year-old Leticia Resendiz told AFP.

Thousands of women also marched in Buenos Aires, Argentina, which has seen a wave of femicide that has claimed on average one life per day so far this year.

“We want to be free, alive and without fear,” said posters carried by the demonstrators.

Clashes broke out in Chile, as police used water cannon and tear gas to disperse thousands of protesters who painted the slogan “They are killing us” on the esplanade next to Plaza Italia, in central Santiago.

More than 100 activists wearing purple to symbolize women’s struggle gathered outside the prosecutor’s office in Honduras to demand justice for nurse Keyla Martinez, 26, who died in police custody last month.

“Here, the life of the woman is worth nothing,” said Maria Julia Avila, 49. Honduras’ human rights watchdog says 4,769 women were murdered in the country between 2010 and 2020.

In France, where one woman is killed every three days by their partner or ex-partner, according to 2019 government figures, tens of thousands marched in major cities to call for stronger police action against femicide.

In Turkey, several hundred Muslim Uighur women protested near China’s walled-off consulate in Istanbul, calling for the closure of mass-incarceration camps in the Xinjiang region.

“Rape is a crime against humanity,” read one poster, referring to a BBC report alleging systemic rape and forced sterilization in the camps—charges China denies.

Thousands marched elsewhere in Istanbul and Ankara, many of them angered by a recent viral video purporting to show an attack on a woman by her ex-husband in front of their five-year-old child in the country’s north. “We’re not scared, we won’t be silent and we won’t bow down,” some posters read.

Hundreds gathered in the Algerian capital to protest against a family code that governs family and property relations, and which many view as demeaning to women.

Nearly 2,000 people gathered in Kiev to demand that Ukraine ratify the Istanbul Convention against domestic abuse.

In Spain, Madrid banned gatherings over the virus, but a few dozen women gathered nevertheless.

Several thousand demonstrators massed in Barcelona for a socially distanced march, wearing purple masks and carrying posters with slogans such as: “No means no” and “The real pandemic is machismo.”

“The pandemic has made the differences clearer. Who’s been left to look after everyone at home? Who’s had problems going back to work?” asked Alys Samson, 29.

“Covid-19 has threatened the health, the economic security and the physical security of women everywhere,” Harris said in a video address recorded in Washington.

The United States also announced it would join an informal UN group on curbing violence against women and girls, created last year and presided over by the European Union.

In Greece, where the media has been full of stories about sexual harassment, hundreds of women gathered in Athens’ central Syntagma Square to mark the country’s own #MeToo movement.

In the Polish capital Warsaw, men and women protested a near-total ban on abortion following a recent tightening of the rules.

And in Hungary, where it is traditional to buy flowers for women on this day, flower shops were granted an exemption from a fresh two-week coronavirus lockdown.

In India, women thronged the outskirts of the capital to join forces with farmers staging a months-long protest against controversial agricultural reforms.

Many were maskless and ignored social distancing, despite India having one of Asia’s highest coronavirus infection and death rates.

In neighboring Myanmar, where the military seized power last month, women stood on the frontline of anti-coup protests in the commercial capital Yangon.

Police and soldiers there have killed more than 50 people and arrested nearly 1,800 in an increasingly brutal crackdown on demonstrators.

“Generally, leadership seems to be for men only,” said 33-year-old protester Cora. “In this uprising, women came out in the streets and led the protests.”

There were also marches across deeply conservative Pakistan, while hundreds gathered in the Philippine capital Manila to protest the killing of activists on Sunday.

“Covid-19 has heightened inequalities, and this has also affected how women are organizing themselves,” Filipino legislator Sarah Elago told AFP.

“This has become more difficult to do now because they themselves are being attacked for speaking up.”

The UN children’s organization UNICEF released a report warning that the effects of the coronavirus could lead to an additional 10 million child marriages this decade.

The Afghan Journalists Safety Committee said more than 300 female journalists had quit or lost their jobs in the past six months as a wave of murders targeting the press intensifies there.