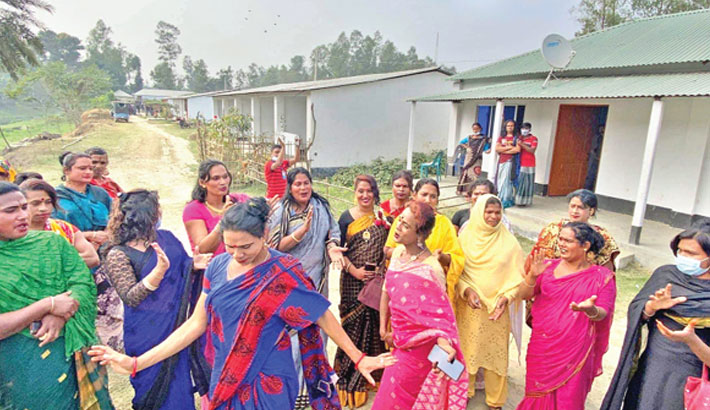 A recent photo shows a group of transgender people expressing their joy after getting semi-concrete house under Ashrayan-2 project in Ullapara upazila of Sirajganj district.

A 13-year-old teenger fled home in Ullapara upazila of Sirajganj district to know about “his” or “her” true sexual identity, a fact that exposed the child to a state of wilderness and the family to a social stigma.

The cruel reality eventually prompted the child to leave “him” or “her” to the destiny, fleeing the home for good to free the family from the stigma and humiliation caused by “his” or “her” gender crisis, reports BSS.

“I fled my home at very early age after enduring both physical and mental torture as I used to behave more like a girl than a boy,” said Phool who later preferred to be identified by this name.

Phool, who was later treated as a ‘hijra’ (transgender), however, could not remember her age when she left home as she was very little at that time.

“Actually I was forced to leave the home at an age when I was unable to understand the matter of gender. My family members, especially siblings, used to ask me to free them from a social stigma by leaving them,” the girl with very lovely and pretty face looking was recalling her bitter childhood memories and weeping her tears.

Phool recalled that she passed just a confined life until she left her home as doors of all relatives were shut for her. “I was not allowed to attend any social gathering. Even, visiting doctor after feeling sick was also barred for me,” Phool said.

When she fled home, she didn’t know what would happen in her fate. But Phool luckily found a group of transgender people who welcomed her in their troupe which earns money by singing and dancing and at times performing folk plays known as ‘Jatra’.

“After leaving my family I was leading just a floating life with other transgender people as no house owner wanted us as tenants,” she said.

Phool is now 13 but after languishing a virtual street life for a long time, she now has an abode herself thanks to Prime Minister Sheikh Hasina’s Asrayan Prokalpa.

Nonetheless, this shelter is not mere a postal address for Phool, rather it provided her a long cherished dignity, social security and sense of pride as a human being.

She has started living at a house of four semi-pucca barracks with five units constructed on 0.66 acres of land under ‘Hatikumrul Third Gender (hijra) Asrayan Prokalpa’ along with 50 members of 20 families.

On January 23, Prime Minister Sheikh Hasina handed over the barracks also subtitled as “Priyo Neer Asrayan-2 Prokalpa” to the transgender families alongside handing over houses to 69,904 homeless and landless families across the country under the Asrayan-2 Prokalpa coinciding with Father of the Nation Bangabandhu Sheikh Mujibur Rahman’s birth centenary celebrations.

Apart from rehabilitating the transgender people, the government has distributed sewing machines among them and is extending support for rearing cows and goats, farming poultry and pigeons along with cultivating vegetables.

“Now I don’t have to depend on anybody’s mercy for my shelter and livelihood as well,” Phool said with a smiling face.

She is now earning her livelihood by making garment products with her sewing machine. “We started seeing afresh dream of leading a social life with dignity as our affectionate Prime Minister arranged the housing facilities for us . . . I’m very very grateful to her.”

“We wish the honourable prime minister a sound and long life,” she added.

A compatriot of Phool, Pori Moni, 18, of the same upazila, also left her home six years ago to free her family from the stigma and disgrace caused by her gender crisis.

“This was painful . . . but a pressing necessity for me was to flee my own home to save my family from being stigmatised further . . . I decided it will be best for all if I quit my home,” she said.

Pori Moni even did not reach the age to be treated as a teenager, a time when she even thought of committing suicide to evade an inhuman life but eventually decided to flee the home.

“Until I was about seven I didn’t know that I wasn’t a girl. My family treated me as a boy and beat me regularly because I used to act more like a girl than a boy,” she said.

Like Phool and Pori Moni, many of these transgender children were ousted from their families even before becoming teenagers to remain one of the most marginalised social groups though Bangladesh officially recognized them as a third gender in 2013 and provided voting rights to them in 2019.

Asrayan Prokalpa-2 Project Director Md Mahbub Hossain said the government has taken an initiative to rehabilitate the transgender people across the country with an inclusive development approach.

As part of that, a total of 50 members of 20 transgender families were rehabilitated at the “Priyo Neer Asrayan-2 Prokalpa” at Hatikumrul in Ullapara upazila of Sirajganj, he added.

Besides, a process is underway for rehabilitating 125 more transgender families at “Hijra (transgender) Palli” adjacent to Bangi Becha Bridge in Sadar upazila of Dinajpur district under the ‘Asrayan Prokalpa-2’, Hossain said.