Bangladesh, India Must Stand by Each Other 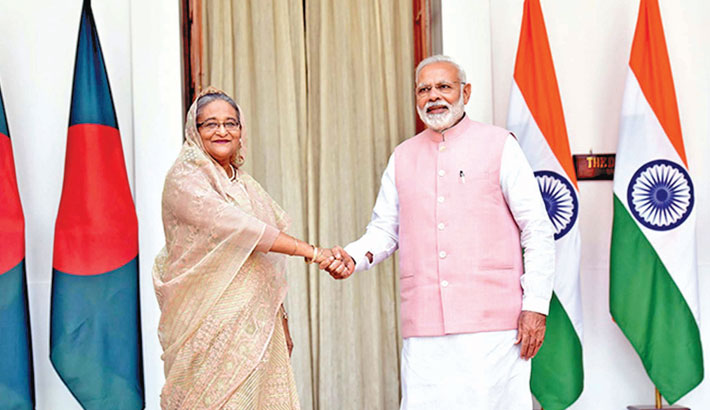 Indian Prime Minister Narendra Modi will pay a state visit to Bangladesh on March 26 and 27. This time, centering on the Dhaka tour, lots of activities are going on at the Ministry of Foreign Affairs of India and the Indian PM’s Secretariat. A diplomatic homework is underway in Dhaka and New Delhi.

Indian Foreign Minister Jaishankar visited Dhaka recently. During his visit, he had a long discussion with Bangladesh Foreign Minister AK Abdul Momen. The relationship of Bangladesh Prime Minister Sheikh Hasina with Jaishankar is very cordial. Foreign Secretary Harsh Vardhan Shringla was the Indian High Commissioner to Bangladesh. He played an important role in organising the Indian foreign minister’s visit to Dhaka. The Indian PM will visit Bangladesh at a time when the West Bengal Vidhan Sabha election is imminent. The West Bengal Legislative Assembly election is due to begin on March 27. And the Indian premier will reach Dhaka on March 26 while he will set for Tungipara in Gopalganj on March 27 to see for himself the ancestral home of Bangabandhu Sheikh Mujibur Rahman. This has been informed by the Ministry of Foreign Affairs of India.

Not only that, but the Indian PM intends to visit Orakandi, the birthplace of Harichand Thakur, the proponent of the 'Matua' community, a Hindu sect. It was on March 11 of either 1812 or 1811, Harichand Thakur was born. His son Guruchand Thakur propagated the messages and directives of his father throughout Bengal. The most sacred shrine of the 'Matua' community is situated at Orakandi, a remote village in Bangladesh. A temple is located there and the Indian PM wants to visit it. The BJP high command thinks that the members of the 'Matua' community of West Bengal would express their satisfaction if the PM pays tributes to Harichand and Guruchand. So, lots of people think that besides strengthening the Indo-Bangladesh bilateral ties, he is keen enough to carry with him a message for the 'Matua' community. But it is of little significance involving the election of an Indian state. However, the Indian Ministry of Foreign Affairs is yet to finalise the PM’s visit to Orakandi. The reason is the non-existence of a helipad. It will be quite troublesome for landing a helicopter. Security issues matter in the case of a road trip. Dhaka is interested enough, but the security forces of Indian SPG are yet to give clearance in this regard.

About this visit, it can be stated that the Indian PM is moving forward the Indo-Bangladesh ties from the very inception of his premiership. So, he is not giving that importance to BJP’s narrow political view. There might be a conflict between Mamata Banerjee and Narendra Modi during West Bengal Vidhan Sabha polls. It is because Mamata Banerjee, Narendra Modi, or BJP top leaders could not sign the Teesta deal. It is also true that Narendra Modi, during his Bangladesh tour, would affirm India’s stance on the Teesta accord. India did not backtrack from its commitment that had already been informed to Bangladesh PM Sheikh Hasina by Jaishankar. It is hoped that Narendra Modi would take a fresh initiative in signing the Teesta agreement. Nobody knows what would be the outcome of the West Bengal elections. But, whatever be the polls result no matter what party ascends to power, the Indian PM thinks that next time signing of Teesta deal will not at all be that impossible.

But, before this trip, it will be worthwhile to keep in mind that a virtual summit was held between India and Bangladesh in December last year. Foreign ministers of the two countries held a meeting of the Joint Consultative Committee (JCC) in September. There had been discussions and dialogues among the foreign secretaries, power secretaries, home secretaries, police chiefs, BSF and BGB of Bangladesh and the Defence department.

Praising Sheikh Hasina, Jaishankar stated about Bangladesh’s socio-economic advancement which helps move forward the bilateral ties as well as the leadership. In this region, under Sheikh Hasina’s leadership, Bangladesh has been advancing economically. There is little doubt that in the ongoing Mujib birth centenary or Mujib Barsho, Bangladesh will celebrate 50 years of its independence on one side while on another side there come 50 years of Indo-Bangladesh bilateral ties. The Indian PM will join the Mujib Barsho celebrations. On the occasion, there will be a reminiscence of past events and discussions based on the reality of finding ways to move forward the bilateral ties in the coming days. Because of this reason, this time, the Indian Prime Minister’s Dhaka tour is very significant.

On arrival at Dhaka, Jaishankar informed that as part of corona diplomacy, the process of vaccine distribution was launched. The supply of vaccines won’t be stopped. A policy guideline is being formulated to this effect. That is being sent to Bangladesh. Bangladesh is purchasing vaccines from the Serum Institute of India. That is reaching the people of Bangladesh. Sheikh Hasina is deftly reaching the vaccine to rural areas, this has been admitted by Jaishankar. He has openly said that the water resource secretaries will hold discussions about all other rivers besides the Teesta and they have already discussed the issue. A few days ago, dialogues were held in New Delhi.

Presently, a festive environment prevails. The Bangladesh High Commission in New Delhi organised programmes to take stock of the bilateral ties marking Mujib Barsho and 50 years of Bangladesh independence war, 1971. Discussions and various cultural functions are being held in both the countries and those will be held in the future. Presently, the entire world is busy with corona diplomacy and vaccine distribution. For the time being, a pause in the Sino-Indian conflict is tangible. There is also a possibility of a pause in the Indo-Pakistan conflict. But, India is cautious enough over the Sino-Pak axis. At this moment, Narendra Modi is well-aware of the geo-strategic position of Bangladesh. So, in such a situation, India wants peace in the sub-continent. Sheikh Hasina too strives to create a peaceful atmosphere between the two countries. Not only that, an effort is underway to create a peaceful environment in the sub-continent. But, whatever be the sub-continental situation, Bangladesh and India must remain beside each other. India deeply wants so and it is a major objective of Narendra Modi’s upcoming Bangladesh tour to convey the message to Bangladesh.