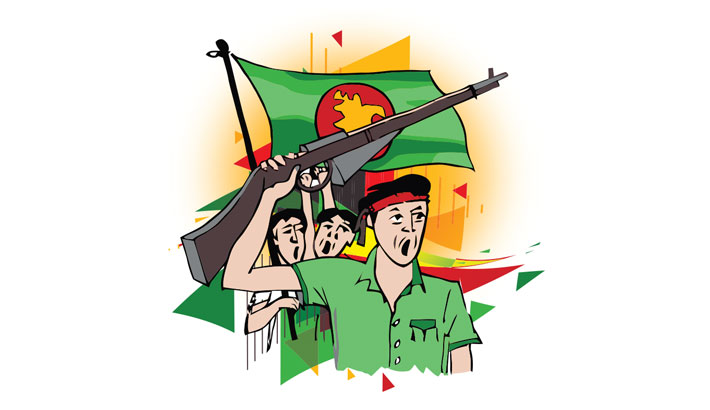 The leftwing leaders in the then East Pakistan demonstrated their solidarity with Bangabandhu Sheikh Mujibur Rahman after he had delivered his fiery speech on March 7, sowing the seed of independence that sprouted on December 16.

He extended his support for the growing non-cooperation movement declared by Awami League in East Pakistan and said that it would soon come out as an independent country.

He urged president Yahya Khan to declare that the two wings of Pakistan are free of each other.

On the other hand, a group of leftist force of East Pakistan in exile formed the Bangladesh Jatiyo Mukti Songram Somonnoy Committee or the Bangladesh National Freedom Struggle Organising Committee in West Bengal, India.

The mass people throughout East Pakistan continued taking part in processions and rallies under the leadership of Awami League (AL) leaders and making the independence increasingly inevitable.

The top AL leaders revised some of their earlier programmes and issued some new directives as well.

All operations of official and business activities were stopped except essential public services.

The government offices and other establishments continued observing strike called by Bangabandhu. Only banks were operated to deal with transactions inside East Pakistan.

Air Marshal Asghar Ali Khan remained as an exception as he consistently told president Yahya Khan that he should hand over power to Sheikh Mujib to stop division in the country.

However, a series of meetings was held at Pakistan Army headquarters in Rawalpindi to find out ways for tackling Bengali nationalistic movement in East Pakistan.

Besides, the army was increasing the number of soldiers in East Pakistan carrying them along the long route between Karachi and Dhaka via Sri Lanka.

The mass people in East Pakistan were determined to reach their ultimate goal of achieving independence and nothing happened here without the approval of Bangabandhu.

It was clear that Pakistan had only one result ahead but the world was waiting to see how it would happen.