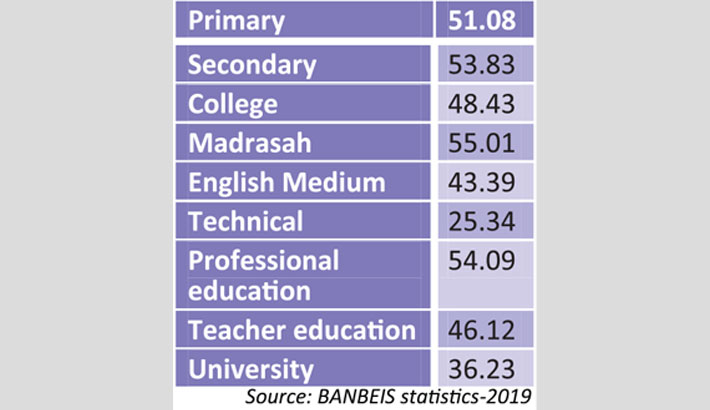 Women are advancing in education and job market remarkably thanks to various initiatives taken by the government in the country.

This has been possible as the Awami League government took various steps for women education in the country after it had come to power in 2009.

The government is taking some dynamic steps to achieve the goal of education so that it can achieve the Millennium Development Goals (MDGs).

The government is doing the needful to bring equality in the proportion of enrollment in primary and secondary education.

Although, 2015 was the deadline to meet the goals of MDGs, it was possible by Bangladesh government to achieve it a few years before the timeline.

Talking to the Daily Sun, educationist Prof AAMS Arefin Siddique said, “I think the government’s moral commitment to improve female education in the country is one of the key reasons behind the success story of the women in education.”

He said “Stipends for girl students, free textbooks and women-friendly environment in educational institutions also encouraged parents to send their daughter to schools.”

Besides, the number of educational institutions has also increased in the country in the recent times. This is playing a good role for the development of the women education in the country,

The educationist said the participation of female students is increasing day by day for various initiatives of the government including providing free textbooks to the students on the first day of New Year, giving stipends and school feeding programme.

In February 26, last year, a total of 172 meritorious students from public and private universities were awarded “Prime Minister Gold Medal 2018” for their academic achievements.

Out of the 172 students, 84 are male while 88 female students from 36 universities, who secured the highest marks or CGPA in their faculties, got the Prime Minister Gold Medal.

The female are also performing goods in job markets through their good academic results and performance. The number of female applicants and recommended candidates in BCS, the most competitive examination in Bangladesh, is increasing day by day.

The results of recent BCS exams show a picture of women moving forward in the country. In the 34th BCS exam, 32.35 per cent of the applicants were women while 35.62 percent female got recommendation for the appointment.