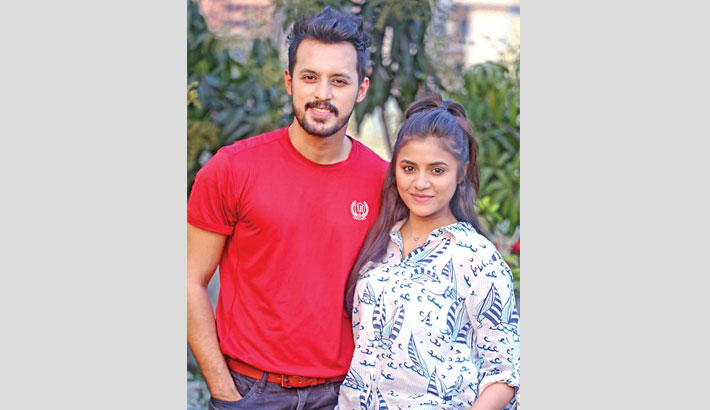 Irfan Sajjad and Tasnuva Tisha are two audience-admired small screen actors of the country. The duo has presented some popular dramas to the audience. Now, the pair will be seen in a new drama titled ‘Facebook’.

The tele play has been written by Jewel Kabir. Amitabh Ahmed Rana and Subroto Mitra have jointly directed it.

About the drama, Irfan Sajjad said, “The storyline of ‘Facebook’ is really good. I’ve enjoyed the shooting of the drama. I hope the audience will enjoy it. Thanks Rana bhai and Subroto dada for this wonderful drama.”

Amitabh Rana said, “The story of the drama is based on a real-life experience of a girl. Both Irfan and Tisha have done their job wonderfully. We (Subroto and me) have tried our level best to make a good drama. We hope the audience will also enjoy the drama very much.”

Actor and model Irfan Sajjad came to the limelight after he won the 2013 season of reality show ‘Fair and Handsome – The Ultimate Man’. Since then he has appeared in numerous TV dramas and several films.

The actor started his career as an actor through the telefilm ‘Bhalobashar Golpo’ by Mabrur Rashid Bannah in 2013.

Sajjad made his big screen debut in director Alvi Ahmed’s film ‘U-Turn’ in 2015. His second film, ‘Mon Jane Na Moner Thikana’ was released in 2016.  He co-starred with Bidya Sinha Mim in Tania Ahmed’s ‘Bhalobasha Emoni Hoy’, which was released in 2017.

On the other hand, Tasnuva Tisha is a popular actress of the small screen. Her popular works are ‘August 14’, ‘Shondeher Obokash’, ‘Durer Somoi’ and ‘Bhul Jostnai’.