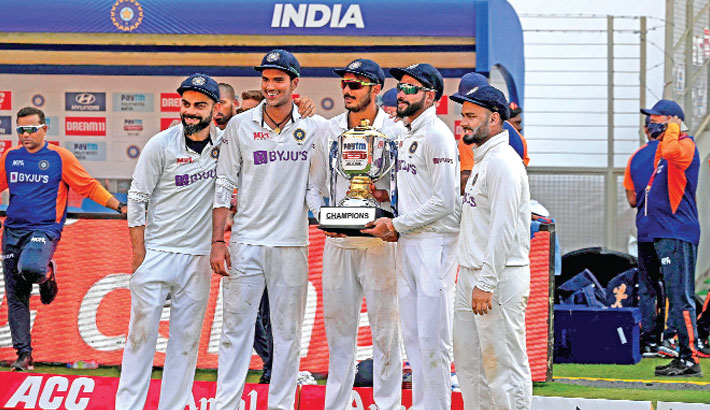 Indian players pose with the trophy after winning the test series against England at Narendra Modi Stadium in Motera on Saturday. – AFP PHOTO

Spinners Ravichandran Ashwin and Axar Patel took all 10 wickets on Saturday as India crushed England inside three days to win the fourth Test and seal the series 3-1.

After the latest emphatic innings and 25-run victory, India captain Virat Kohli hailed the way his side came back from a game down to dominate the series and book their place in the World Test Championship final against New Zealand.

India completed three victories in only nine of the 15 days available.

"The comeback in Chennai (the 2nd Test) pleased me the most. The first game was an aberration and England outplayed us," Kohli said. England captain Joe Root admitted his side, who suffered a two-day humiliation in the third Test, had been "outplayed" again.

"There are a few key areas of the games where India managed to grab them and we didn't," he said.

Ashwin bowled Dan Lawrence for 50 and ended England's second innings on 135 to seal the match, in the world's biggest cricket stadium in Ahmedabad.

Ashwin, who was named player of the series, led the bowling chart with 32 wickets followed by Patel, who played one game fewer, on 27. England spinner Jack Leach was third with 18 scalps.

This win was set up by wicketkeeper-batsman Rishabh Pant, who made 101 on day two, and Washington Sundar, who hit an unbeaten 96 as India made a commanding 365.

Pant scored his third Test ton in a 113-run stand with Sundar to lift India from a precarious 146-6 in response to England's first innings of 205.

Sundar kept up the attack as the final three wickets fell on Saturday morning but ran out of partners and remained four shy of his century.

England lost early and regular wickets to go down tamely in 54.5 overs.