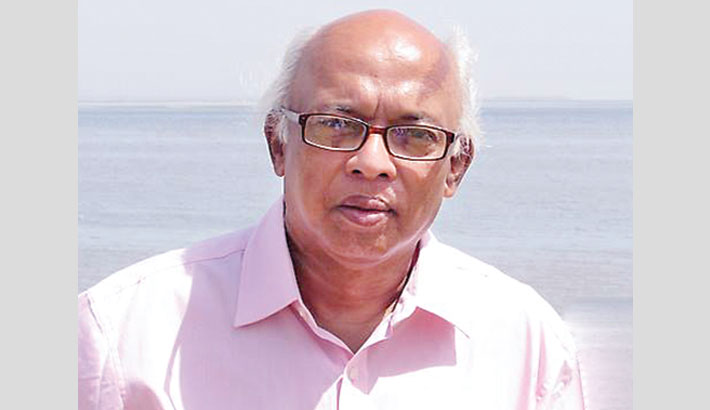 Bangabandhu Sheikh Mujibur Rahman’s oratory was on the peaks that afternoon. It was his finest hour. On 7 March 1971, it was at once the national political leader and global statesman who shone through in his seminal speech at the Dhaka Race Course (today’s Suhrawardy Udyan).

The eighteen-minute speech the nation and the world heard on the day was a clear signal of how Bangabandhu had not only grown into a historical figure but was on his way to creating new history. Observe the entire tenor of his address --- the nuances, the references, the sheer poetry which it came enveloped in. Fifty years ago, it was a speech which defined our genesis as a nation. Fifty years on, the speech remains our powerful claim on history, our reassertion of heritage.

But as you think back on the words that flowed from the man who would soon be Father of the Nation, look back at that image of a reflective Bangabandhu, the weight of the world on his shoulders, slowly mounting the steps to the dais at the Race Course. Given the pressure of the preceding few days he had been under, there was absolutely no way for the nation to predict the course he would set for us. The firebrand students who had already taken to the streets to protest the postponement of the National Assembly session by Yahya Khan, the myriad foreign journalists present in Dhaka, indeed the Bengali nation as a whole wondered if the Leader would go for a declaration of Bangladesh’s independence on the day. Lurking in the cantonment were the forces kept on standby by a newly arrived Tikka Khan, the Butcher of Baluchistan ready to assume new notoriety as Butcher of Bengal, willing to shoot and kill should Bangabandhu go for a break with Pakistan.

As Bangabandhu rose to address that million-strong crowd and the world by extension, we waited in nail-biting suspense. The Bengalis gunned down by the army warranted his concern and his worries. His sweeping view of the yet-to-be-born country --- note his reference to the blood splattered on the streets of Dhaka, Chittagong, Rajshahi and other places --- was but natural. It was quickly followed by his articulation of the objectives before his people, a nation which needed its rights, its emancipation to be the centerpiece of politics. Bangabandhu’s voice, in that familiar tenor we knew so well, rose in crescendo. Note that it was not a harangue. Note that there was nothing polemical about it. Reasoning was all.

It was the structure of the speech that was to accord to it the historical permanence it is remembered for. Encapsulated within it was a narrative that drew attention to the twenty three years of neglect and deprivation Bengalis had suffered in the state of Pakistan. Bangabandhu gave his listeners the facts in their raw form: whenever the Bengalis, fifty-six per cent of the country’s population, thought they could ascend to power at the centre, they had been pounced on. The references to the dismissal of the Jukto Front ministry in 1954, the decade of bondage inaugurated and presided over by Ayub Khan, the willingness of the Bengali nation to agree to Yahya Khan’s promise of an election, of its resolve to frame a constitution were the broad outlines of history Sheikh Mujibur Rahman was laying out before the world. His point was simple and yet loaded with meaning --- the history of the repression exercised on Bengalis in Pakistan was fundamentally a long web of intrigue woven at the centre of power in the western segment of Pakistan.

Expectations were in the air. That bamboo-wielding million-strong crowd at the Race Course waited for the call to liberty. Beyond those grounds, a whole world waited with bated breath to hear Bangabandhu proclaim freedom for Bangladesh. And yet that speech was underpinned by his lifelong belief in constitutional politics, in his conviction that adventurism could have no part in his politics. On 7 March, he was acutely conscious of history. Certainly the failed experiment of Biafra between 1967 and 1970 was uppermost in his mind. He surely had his pulse on the poverty of politics demonstrated by Ian Smith’s UDI in Rhodesia in 1965. Bangabandhu would not go for a unilateral declaration of independence. Secession was anathema to him, for it was his conviction that the majority did not secede. Bengalis were the majority, and the majority had come by fresh political legitimacy through the election of December 1970.

For Sheikh Mujibur Rahman, the speech was an eloquent expression of high ideals. He would show his people the path out of the woods through a shining prism of principled politics. He would not be branded a separatist, which is why he went for a formulation of astute strategy to counter the conspiracy ranged against him. The strategy was four-fold: the soldiers would have to go back to the barracks, an inquiry must be launched into the killings by the army, martial law would have to be lifted and --- this was where the climax was reached --- power must be transferred to the elected representatives of the people. The die was cast. That was where Bangabandhu touched the heights, envisioning as he had never before the future of his people. From ground level he had made it to the top of the mountain. Only when his four demands were acknowledged and acted upon would he consider the issue of whether or not to attend the National Assembly session. He was making no promises. He was in full command, morally and politically. East Pakistan was a de jure Bangladesh he had begun to administer.

Even so, within the parameters of the speech he let his people know of the terror that might yet descend on them. Thus did he inform the world that he was not going for a declaration of independence and yet was proclaiming his nation’s freedom through his call for a struggle for liberty. The struggle was aimed at emancipation. Its overriding objective was independence. He had made his point, in that very intellectual sense of the meaning. It was a combination of pragmatism and radicalism he brought into play. On the one hand, he gave the junta a long rope to hang itself. On the other, he informed it in no uncertain terms that he and his people were reconfiguring the present, to link it with the priorities of the future. Pakistan was in the past; Bangladesh was the new dawn.

Secularism underlined that idea. Having been in politics since his twenties, having been prisoner in Pakistan, endlessly, Bangabandhu was fully cognizant of the damage communalism and racism could do. Democratic states are not built on such narrow concepts. That was why a crucial segment of the speech was focused on his appeal for unity between Hindus and Muslims, between Bengalis and non-Bengalis. In his vast conception of politics, they were all brothers who needed to be on guard against the common enemy, against agent provocateurs. Bangladesh would be a brotherhood of enlightened people.

On 7 March 1971, Bangabandhu Sheikh Mujibur Rahman embodied leadership in all its firmness and finesse and foresight. The poise in him as he soared in oratory, eventually to map the road to the Promised Land for his people, transformed those eighteen minutes into epic poetry we read and recite over and over again. Half a century on, the brilliance in the words, the force in the delivery of them, the rainbow dreams shaping themselves with every syllable and every word and every phrase define and redefine the ethos of this country.

On 7 March, Bangabandhu Sheikh Mujibur Rahman gave us the plain and simple message: we his people had crossed the Rubicon.