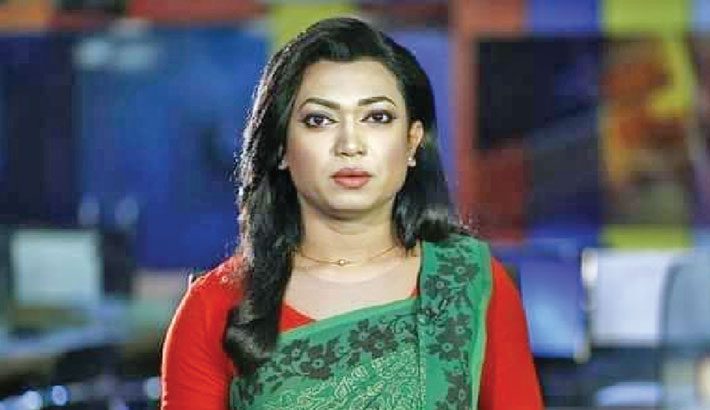 Breaking new ground for transgender women in society, Tashnuva Anan Shishir, already renowned as a model and social worker, is set to become the first-ever transgender woman to work as a news presenter on a television channel in Bangladesh, reports UNB.

She will be seen presenting a regular news bulletin for the first time at the private satellite television channel Boishakhi Tele-vision on March 8, marking International Women’s Day.

Sharing her feelings with UNB on Friday night, Shishir said she is overwhelmed by the opportunity. Television news presenters are taken very close to their hearts by Bangladeshis, often becoming trusted voices on the strength of regularly appearing on screen and relaying information held in high regard, i.e. the news. If the aim is to normalise the presence of ‘trans’ folk in society, few positions could be more potent.

“I cannot express how overwhelming this is, for myself and my community. Individuals from my  community have been bullied and harassed for long, and only exposure like this can help create

room for the development of our people in the society,” Shishir said.

Sharing her recruitment process, she said, “The audition and selection process was as normal and usual as it has always been for other presenters. The entire process was rigorous, and I am grateful to Boishakhi TV for selecting me.” “With this kind of positive approach and exposure for individuals like me, I believe our society will thrive towards community sustainability and community development,” she told UNB.

According to the authorities of Boishakhi Television, they came up with this maiden initiative to mark International Women’s Day on 8 March, alongside the Golden Jubilee celebration of independence.

Alongside Shishir, they also appointed a transgender woman in the entertainment department, who will star in a drama named “Chapabaz” to be aired on the same day.

Tashnuva has recently earned her scholarships in two categories to pursue higher studies in the Master of Public Health (MPH) program at the James P Grant School of Public Health (JPGSPH), Brac University, along with Ho Chi Minh Islam, another iconic transgender woman in the country.

Today’s Tashnuva challenged the identity of Kamal Hossain Shishir, her old self -  and eventually came out as a trans-woman during her twenties, alongside starting her solo journey with social works, dance and theatre.

She has been an active member of the renowned theatre troupe BotTala, and recently she has been signed for two upcoming movies including Anonno Mamun’s film ‘Koshai’ as a detective officer, and Syed Shahriar’s cinema ‘Goal’ where she will be seen as a football coach. Previously she worked as the Case Management Officer in the Ovibashi Karmi Unnayan Program (OKUP) from June 2020, worked as the project officer in Bandhu Social Welfare Society and also worked in other voluntary projects before for organizations including Sangat - A Feminist Network, Roopban, Oboyob, Bangladesh Youth Leadership Center (BYLC), and as an Executive Officer for the National Human Rights Commission of Bangladesh, among other things.