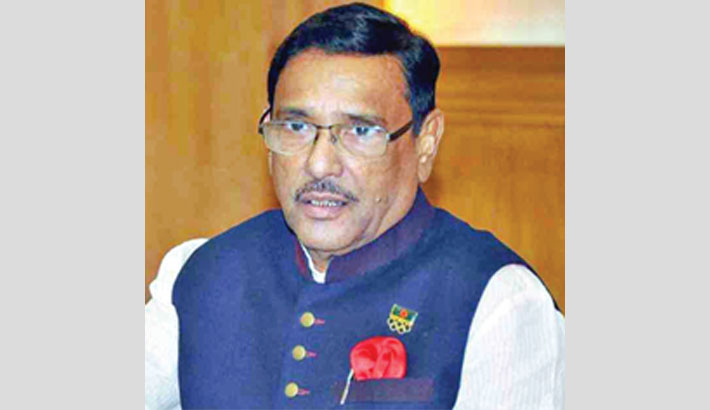 Awami League General Secretary Obaidul Quader on Saturday termed the Bangladesh Nationalist Party’s announcement to observe the historic March 7 ‘nothing but another political hypocrisy’ and said that the party wants to hide its face with mask through this programme.

“BNP not only banned Bangabandhu’s March 7 speech but also tortured those who played the record of the speech,” he said before

joining a meeting at the AL’s central office on Bangabandhu Avenue in the capital.

Quader, also road transport and bridges minister, said BNP made many people crippled by torturing them for playing the record of the landmark speech of Father of the Nation Bangabandhu

Sheikh Mujibur Rahman while many people were imprisoned for playing the speech.

“Today, suddenly after 46 years, BNP realised the observance of the March 7. This is nothing but their political hypocrisy,” he said.

The minister said the people did not accept the opening of BNP’s programmes of the month of March, which is historically significant, by a convicted fugitive criminal.

BNP made a farce with the spirit of Liberation War by opening the programme of the month of independence by a convicted criminal, he said, adding that by doing so, BNP betrayed the history of building the nation’s self-identity.

He criticised the provocative comment made at BNP’s Rajshahi divisional rally hinting at recurrence of another August 15-like incident.

Quader asked the BNP leaders why there was no clear statement from the party yet on the comment.

He said giving no clear statement over the comment in four/five days proved that it is BNP’s organisational stance.

BNP is still busy doing politics of conspiracy, killing and coup when the country is going to observe its golden jubilee of independence, he said.

Later, he chaired a joint meeting with presidents and general secretaries of AL’s Dhaka city south and north units and AL’s associate bodies.