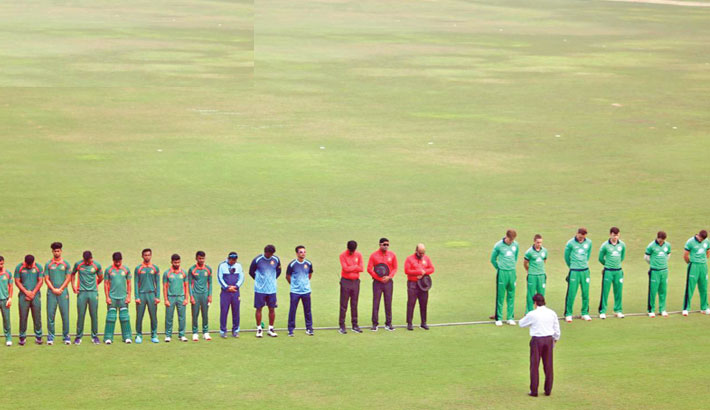 Bangladesh Emerging Team and Ireland Wolves observe a minute’s silence before the start of the first one-dayer as a mark of respect to Premarathna Ramanayake, father of BCB HP bowling coach Champaka Ramanayake, who passed away in Sri Lanka on Friday at the age of 82. —BCB photo

The first of five-match one-day series between Bangladesh Emerging Team and Ireland Wolves was suspended on medical advice in Chattogram on Friday after one Covid-19 positive case was found in the Wolves squad.

Bangladesh Emerging team were batting on 122-4 in 30 overs after being asked to bat first by Wolves when the news came out that pacer Ruhan Pretorius, who also bowled four overs and got a wicket in the contest, tested Covid-19 positive.

The play was suspended and the player was immediately isolated ahead of a further test on Friday, Cricket Ireland informed in a press release. 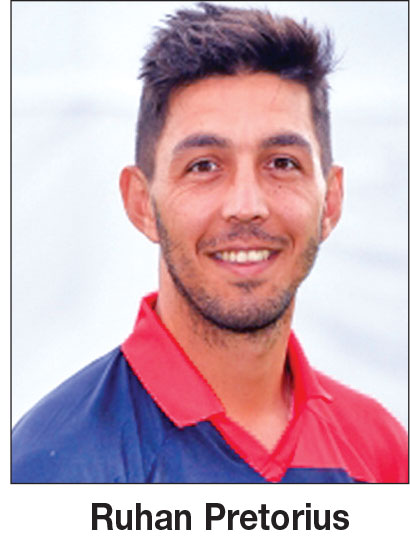 “Prior to today’s game, both squads received negative results for Covid, and the game proceeded as per protocols. However, a review of results by mid-morning by the local laboratory detected one positive test in the Ireland Wolves squad,” it added.

Bangladesh Cricket Board chief executive officer Nizamuddin Chowdhury said they stopped the game immediately after getting the positive report.

“We isolated the player immediately and stopped the game. We had no other choice as part of our Covid-19 protocol for the series,” Nizamuddin told AFP.

According to AFP, players from the Bangladesh Emerging team and Ireland Wolves were tested on Thursday but a delay meant that the results didn't arrive until after the match in Chattogram had begun.

Ireland Wolves, who arrived in Bangladesh on February 18, earlier lost the one-off four-day match by an innings and 23 runs and they are scheduled to play five one-dayers and two T20s in their month-long tour to the country.