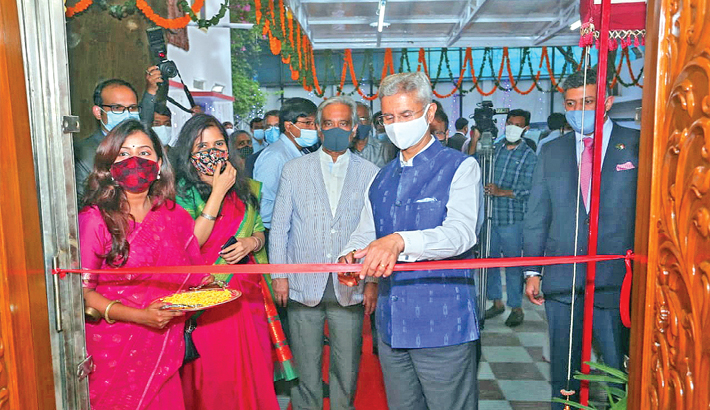 Inaugurating the centre, Dr. S Jaishankar said he is confident that the new cultural centre will be a centre of energy for the very unique relationship between Bangladesh and India.

He highlighted the importance of culture in the daily life and shared cultural heritage between the two countries. “I am delighted to dedicate this new cultural centre to friendship between our  two friendly countries,” said the Indian Minister.

Dr Jaishankar said Dhaka is now one of the few cities in the world where India has two cultural centers within the same city.

“There is no better testimony to the importance of culture in the daily life of this remarkable country,” he said.

“Our shared cultural heritage and strength of our partnership in the cultural domain is the primary driver of the people-to-people element of our partnership,” the Indian Minister said, adding that culture and war of liberation are equally part of India, Bangladesh history.

Jaishankar said this a very special year for both the countries as India and Bangladesh celebrates the birth centenary of Bangladesh’s Father of the Nation Bangabandhu Sheikh Mujibur Rahman and golden jubilee of Bangladesh’s independence and 50 years of diplomatic relations between Bangladesh and India.

The center styled ‘Indian Cultural Center’ is located at the old Indian House in Gulshan-2 where the High Commissioners used to live before. The other cultural center is Indira Gandhi Cultural Center, located at Dhanmondi.

Noted cultural in Bangladeshi cultural personality Asaduzzaman Noor MP, Indian High Commissioner to Bangladesh Vikram Kumar Doraiswami and other senior officials of both countries were present on the occasion.

The Indian External Affairs Minister, who arrived in Dhaka on Thursday morning for a daylong tour to prepare the ground for the visit of Indian Prime Minister Narendra Modi on March 26-27.