Row in Spain over princesses getting UAE vaccines 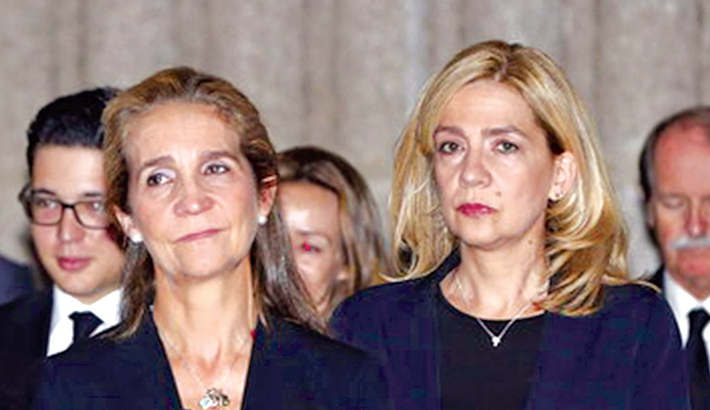 Spain’s royal family came under fire Wednesday after King Felipe VI’s sisters confirmed they were vaccinated for the coronavirus while visiting their father in the UAE, sidestepping Spanish immunisation protocols, reports AFP.

Princess Elena, 57, and Princess Cristina, 55, said they accepted an offer to be vaccinated in order to get a health passport to make it easier to “regularly” visit their father, former king Juan Carlos, in Abu Dhabi.

“If it were not for this reason, we would have waited for our turn to be vaccinated in Spain”, they said in a joint statement published in Spanish media in response to reports they got the jab while visiting their father in Abu Dhabi in February.

The two royals would not yet qualify for the jab under Spain’s Covid-19 immunisation programme, which gives priority to older people and the most vulnerable.

Juan Carlos, who abdicated in 2014, moved to the United Arab Emirates (UAE) in August amid growing questions over his financial dealings.

A spokesman for the royal palace refused to comment on the reports on the grounds that the princesses are formally “not part” of the institution and the palace has no say in their activities.

“The vaccination of the princesses is more news which contributes to discrediting the monarchy. For the public, this constitutes preferential treatment and privileges,” Equality Minister Irene Montero, a member of Podemos, told public television TVE.

The monarchy is one of several issues dividing Podemos and the Socialists, which have governed since January 2020.

It is the first time that an anti-monarchy party has been in power since Spain returned to democracy in the 1970s.

The controversy over the vaccinations comes less than a week after Juan Carlos settled a debt of nearly 4.4 million euros ($5.3 million) with the Spanish tax authorities in a bid to avoid a potential lawsuit.

The back-taxes were due on the previously undeclared value of private jet flights—worth eight million euros, according to press reports—paid by a foundation based in Liechtenstein belonging to a distant cousin of Juan Carlos.

The payment caused outrage in Spain, with Sanchez saying he shared the “rejection” which the “majority” of Spaniards feel towards what he called Juan Carlos’ “uncivic behaviour”.

Spain’s minister for territorial policy, Miquel Iceta of the Socialist party, said taking advantage of your “position” in order to get vaccinated before you have the right to do so was “very bad”.

A Spanish court in 2017 sentenced Princess Cristina’s husband Inaki Urdangarin to six years and three months in prison after finding him guilty of embezzlement, fraud and tax evasion. The court acquitted her of helping him evade taxes.

Spain’s chief of defence staff resigned in January after it was revealed that he got the coronavirus jab in Spain despite not being on a priority list.