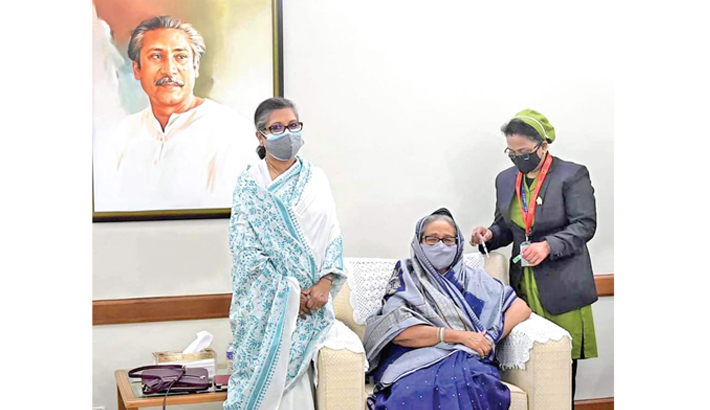 Earlier on February 24, Sheikh Rehana, the youngest daughter of Father of the Nation Bangabandhu Sheikh Mujibur Rahman and sister of Sheikh Hasina, received the Covid-19 vaccine.

Nurse Runu Veronica Costa of the hospital got vaccinated as the first person in Bangladesh.

Some 541 more front-line fighters took the vaccine in five hospitals in Dhaka the following day. On February 7, Bangladesh launched the nationwide Covid-19 vaccination when 31,160 people were inoculated against the deadly pathogen.

Besides, 4,770,953 people have registered as of Thursday afternoon for taking the vaccine.

Bangladesh has so far received 9 million doses of vaccine -- 7 million from the Serum Institute of India (SII) as part of a tripartite agreement signed between the Bangladesh government, Beximco Pharmaceuticals Ltd and the Indian company and 2 million as gift from India.

Bangladesh signed the deal to procure a total of 30 million doses of the jab from the SII.

Besides, it will get more vaccines under the Covax facility, led by the World Health Organization and Gavi, the Vaccine Alliance.