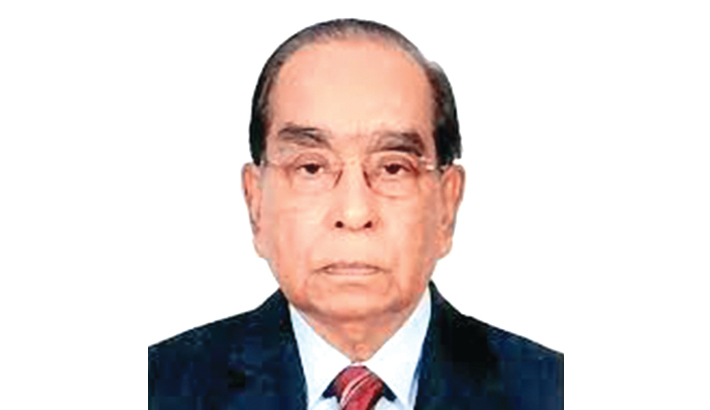 Hossain Toufique Imam, political adviser to the Prime Minister Sheikh Hasina, was laid to eternal rest with state honour in the capital on Thursday.

Imam, also advisory council member of the Awami League, was buried at the Banani Graveyard after Asr prayers following two namaz-e-janazas - first at Ullapara Akbar Ali Government College ground in Sirajganj and second one at Gulshan Azad Mosque in Dhaka. Imam, better known as HT Imam, breathed his last at the age of 86 at Combined Military Hospital around 1:15am on Thursday. He was undergoing treatment at the hospital for age-related complications, including kidney disease.

In a condolence message, the President said the role of HT Imam was very important in the Great Liberation War.

“He (Imam) has worked all his life to develop the spirit of the country’s independence and the Great War of Liberation. Besides, he played a leading role in running the government in the newly independent country,” he mentioned.

The head of the state said HT Imam as a government official also made important contribution to conducting the elections of Bangladesh Awami League in the national elections.

In a condolence message, Prime Minster Sheikh Hasina said, “The contribution of HT Imam to the administrative service will be remembered.”

The Prime Minister said that he had performed with utmost dedication as cabinet secretary of the expatriate government during the Liberation War.

They prayed for eternal peace of the departed soul and conveyed deep sympathy to the bereaved family.

The body of premier’s political affairs adviser was taken to Ullapara upazila in Sirajganj by a helicopter around 9:30am. After the first namaz-e-janaza at Ullapara Akbar Ali Government College ground at 11:00 am, his body was brought back to the capital by the same copter.

Later, his body was kept at the Central Shaheed Minar from 1:30pm to 3:30pm for people from all walks of life to pay their homage.

Later, the body was taken to Gulshan Azad Mosque where the second namaz-e-janaza of HT Imam was held after Asr prayers.

The Dhaka district administration offered guard of honor to the freedom fighter at the Banani graveyard before his burial.

Imam was born on January 15 in 1935. He grew up in several districts as his father, a public servant, was transferred frequently. He passed matriculation exams from Dhaka Collegiate School and intermediate exams from Pabna Edward College.

He graduated from Rajshahi University in 1958 before getting his master’s degree from Dhaka University. He also had a post-graduate diploma in development administration from the London School of Economics.

HT Imam joined the then Pakistan Civil service in 1962 and he defected to Bangladesh and joined the Liberation War.

He served the Mujibnagar government as the cabinet secretary during the country’s War of Liberation in 1971.

After independence, he worked as cabinet secretary until August 26, 1975. He then worked as a project director of the Public Administration Training and Management Project, now BPATC, from 1978 to 1984. He later worked as secretary to communication and planning.

He was serving as the political affairs advisor to Prime Minister Sheikh Hasina since 2014.

Imam never contested in elections. His son Tanveer Imam is the MP from Sirajganj-4 constituency

Awami League general secretary and Road Transport and Bridges Minister Obaidul Quader, among others, also condoled at the death of HT Imam.

In separate condolence messages, they prayed for eternal peace of the departed soul and conveyed deep sympathy to the bereaved family.