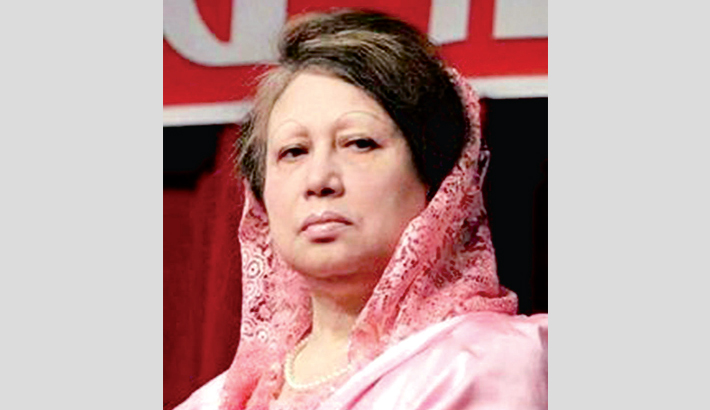 Bangladesh Nationalist Party (BNP) Chairperson Khaleda Zia, who has been staying out of politics since her imprisonment over three years ago, seems no longer dear to party leaders as indicated by their recent activities.

Since her imprisonment on February 8, 2018, BNP used to keep a chair on the dais vacant in its every political programme in honour of the party chief while there had been portraits of party founder Ziaur Rahman, Khaleda and acting Chairman Tarique Rahman in every banner.

But the scenario has changed in recent times as the party and its different front and associate bodies have been arranging programmes without keeping any chair vacant for Khaleda.

Besides, her portrait has been absent in banners of those programmes.

BNP acting Chairman Tarique who has been staying in London for long has been leading the party and joining different programmes through videoconferencing in place of Khaleda.

In the latest development, BNP’s National Committee on the Celebrations of Golden Jubilee of Independence arranged the inaugural function of their month-long programme at Lakeshore Hotel Gulshan in the capital on March 1 with party Standing Committee member Khandaker Mosharraf Hossain in the chair. BNP Secretary General Mirza Fakhrul Islam Alamgir was present at the programme as the chief guest while Tarique inaugurated the party programmes virtually.

However, there was the portrait of only Ziaur Rahman in the banner of the programme but the one of Khaleda was absent, creating doubts among the party leaders and activists across the country about what is happening inside.

“She (Khaleda) is our leader. She is still in politics as the BNP chairperson,” Fakhrul told the Daily Sun.

BNP chairperson’s Adviser Abdus Salam, also member secretary of the party’s National Committee on the Celebrations of Golden Jubilee of Independence, told the Daily Sun: “Nothing can be done without her (Khaleda) as she is our leader. We didn’t portray her photograph in the banner of the inaugural function as we wanted to highlight the contributions of Ziaur Rahman to the War of Liberation. There was no photograph of BNP acting chairman Tarique Rahman in the banner either.”

He, however, admitted that there would have been no problem had they kept Khaleda’s photograph.

Talking to the Daily Sun, many BNP leaders and activists expressed their anger over the incident.

They alleged that a group of party leaders want to keep Khaleda away from the scene.

BNP sources said no chair is now kept vacant in any programme in honour of the party chief while her various directives also go unattended.

A few central and grassroots leaders said for her absence in the political field, some party leaders are going to forget Khaleda as they are much busy with Tarique and trying to minus her from the politics.

Khaleda has been spending time at her Gulshan residence Firoza since her release from jail on March 25 last year and receiving treatment there without the company of any family member keeping herself almost aloof from politics.

Fakhrul said the BNP chief’s health remains as usual and she needs better medical treatment abroad. “The family has applied for extending her release.”

Family sources said the BNP chairperson has been staying in her residence without the company of her family members as Tarique, his wife and daughter and the widow and two daughters of her late son Arafat Rahman Koko have long been staying abroad.

They said they want to take Khaleda to London so that she can stay with her family members and take better treatment if the government allows her to go abroad.

The party insiders said the BNP chief apparently remains out of politics as she is not allowed to carry out political activities or deliver any political statement as per the conditions of her release from jail.

“Tarique Rahman has taken over the full responsibility of the party chief and he has been running the party activities, keeping his mother Khaleda Zia outside the politics currently,” a central BNP leader told the Daily Sun wishing not to be named.

The party insiders said it is highly likely that Khaleda will not return to active politics given her current health condition but she will remain as the party chief until her death.

On March 25 last year, the BNP chief was released from jail for six months upon an executive order considering her age and on humanitarian grounds following an application filed by her family. Later, her release was extended for another six months, which is supposed to end on March 25 next.