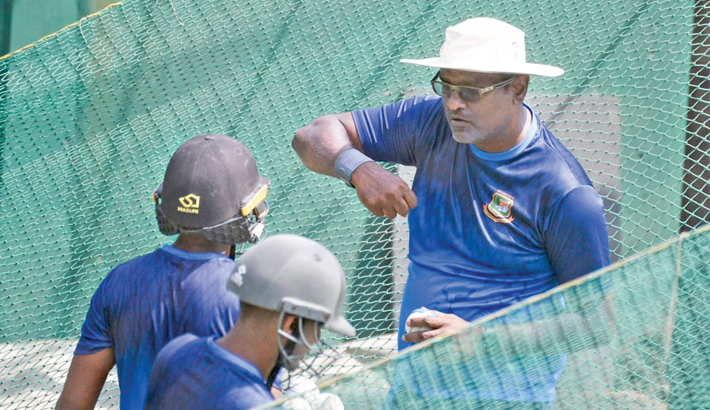 Former Sri Lankan batsman Naveed Nawaz became a household name in Bangladesh when Bangladesh Under-19 team won their maiden ICC Under-19 World Cup last year in South Africa under his helm. The 47-year old is currently coaching another batch of Bangladesh Under-19 players, who will travel to India for a series against Afghanistan counterparts this month which will be their first preparation tour for the next World Cup. Recently he has talked to The Daily Sun regarding the upcoming series, the new batch of players and their long layoff for the Covid-19 pandemic, etc.

What’s your preparation for the Afghanistan series taking place in Dehradun, India? Afghanistan is a fast-rising side, with lots of good spinners and good young batsmen. Is your team ready for the challenge?

Naveed Nawaz: I still don’t know what to expect from Afghanistan, as far as I remember, is in the last six, but I think they have the capability to do better, as we had a practice match against them, which shows that they are a very good team. So I don’t know what to expect from them, as we haven’t seen their squad, and don’t know how they are figuring the eleven. We should concentrate on what we should do, rather than worry about the opponents, as we are focusing on our own strengths so that our boys can be ready in their developmental process ahead of the World Cup.

The Daily Sun: How frustrating was the period in which the Covid-19 pandemic took place, as you had to take Akbar Ali with the boys to England for a series, for their further development and advance them to the international level?

Naveed Nawaz: You can feel the gap between the under-19 and the international level as I have been waiting for them to try to adjust as much as possible to the international level, just after the world championship. But unfortunately, due to the Covid-19 factor and a lot of other things, we had lost the window, and a lot of things happened. We can’t do anything about that as it all is in the past, but what we can do is we can be collective, to at least start the under-19 camps, and then we could be advanced than the other countries, as many of the developed countries have not started their selection process yet, so I think we have done quite a lot in the last four to five months and looking forward to the next ten months as well.

The Daily Sun: Some of your crops, players like Shamim Patwary, Mahmudul Hasan Joy or even Akbar Ali, have been doing great on the domestic levels. Although they are yet not called up for the national team the development is evident in the local games. How do you feel about it?

Naveed Nawaz: It feels good as we have been quite dominating in the under-19s during the last two years and we had the winning percentage of more than 90% in all the games we had played during the world cup, so that had the indication of what the boys are capable of doing. We already have Shoriful Islam in the national team so if you handle the boys properly, I see a lot of potentials in lots of the boys and given to the right hands. I think we should be able to grab many of them to the national team, very shortly.

The Daily Sun: To lead a side to glory, you always need a good leader, just the way Akbar Ali did it for his team last year. Do you have someone like him this time around?

Naveed Nawaz: We do have a couple of boys, who I’ve already identified so we are thinking if we should give these boys a chance and let them lead the team in at least one series, and probably six months prior to the World Cup, we should be able to know, who is the best among the boys to lead the team for the best. The leader is the most important member of the team as he handles the team in the making, as we have last seen Akbar Ali doing so, so we need the right person.

The Daily Sun: There are many players in your squad, who has attracted you the most or rather who do you think has the most potential for the World Cup?

Naveed Nawaz: It’s a bit too early to say any names but we have a good bowling unit. We have some good fast bowlers and some good spinners. As for the batting unit, we have some good batsmen but pretty much inexperienced. So for the next ten months, they have to play a lot of cricket, they have to play a lot of matches; they have to come through that. Championships and winning games are parts of development, so once we develop these players to a certain level, they will win games for us, and they will win tournaments for us, which is very evident in the last two years. We put in a process, we followed a process and we made sure our fielding was in a good standard, we made sure our fitness was as good, we made sure our batsmen were getting runs, we made sure our bowlers were executing their skills. So once you put all the developments in the place, the boys will also learn to follow the process, not thinking about the final outcome, because thinking about a certain outcome, puts a lot of pressure on you.