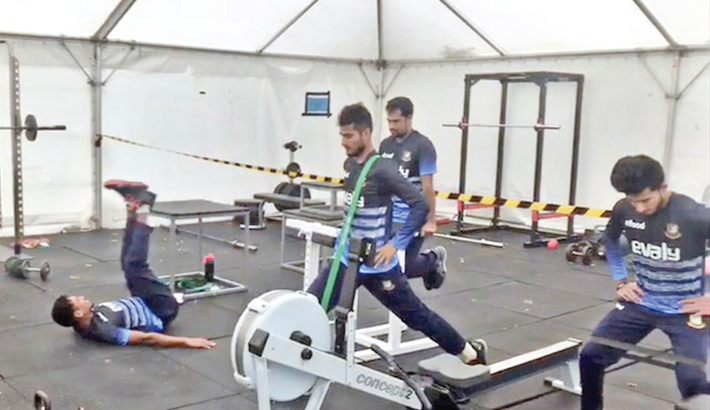 Bangladesh batsman Mohammad Mithun heaved a sigh of relief after the team completed their first phase of mandatory quarantine in Christchurch on Wednesday ahead of their limited-overs series against hosts New Zealand.

“We had movement restrictions for the last few days. Now things are getting normal. Today we get the opportunity to do the gym. It’s really a good feeling to use the gym after a week,” Mithun, who turned 30 on Tuesday, said in a video message.

Tigers, who arrived in Christchurch on February 24, had to pass most of their time in separate rooms at the Christchurch Government Quarantine Center in the last seven days and they only got half-an-hour a day in the last few days to breathe in the open air only in small groups and maintain social distance.

The whole Bangladesh contingent tested Covid-19 negative for a third successive time and following the reports they completed their first gym session on Wednesday since arriving in New Zealand.

Bangladesh will train at the Lincoln Green in groups of seven from today for the next six days which will mark the end of their 14-day mandatory quarantine.

“We are very excited about it. It is very difficult to stay only in a room. There is hardly a chance to do anything remaining inside a room. We can go to the field for preparation from tomorrow (today) for the tournament we came here to play,” said Mithun.

“It’s a nice feeling. We can adjust things after we start our practising,” he added.

Tigers will be allowed to go for the full-fledged practise afterwards and the tourists are expected to have a five-day training camp in Queenstown following the 14-day quarantine.

Bangladesh spin consultant Daniel Vettori will join the team there and he is expected to work with the team for 20-22 days during the series, according to a BCB official.

Mithun admitted that the upcoming series would be a tough one for Tigers as the conditions would be hostile for the visitors.

However, Mithun was also optimistic of bringing better results from previous times as he believed their top-order batsmen needed to showcase good performances against the new balls.

“The series is of course challenging. This is a different condition from ours. We didn’t have the opportunity to play much here,” he said.

“However we know that playing the new ball here is very challenging. If we can survive the new ball as a team, I think there will be more positive results than in previous times. We are taking this as an opportunity,” he added.

The three ODIs are scheduled on March 20, 23 and 26 in Dunedin, Christchurch and Wellington respectively while the three T20Is will take place on March 28, 30 and April 1 in Hamilton, Napier and Auckland respectively.