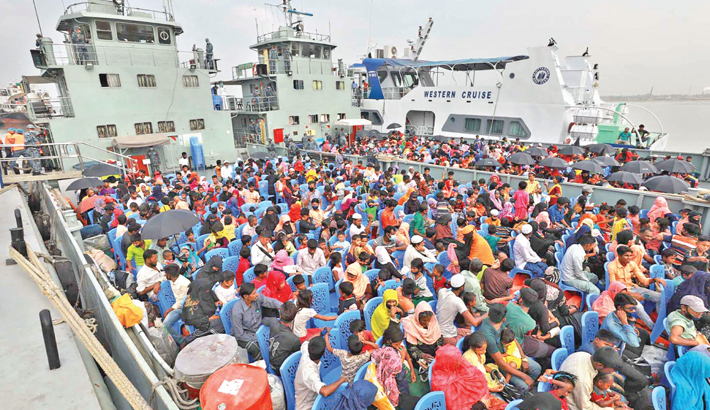 A total of 2,260 Rohingyas board two ships for Bhasan Char, an island in the Bay of Bengal, on Wednesday. —sun photo

Chattogram: A total of 2,260 more Rohingyas reached Bhasan Char in Hatiya upazila of Noakhali district from their camps in Cox’s Bazar on Wednesday.

They have been taken there as part of the government plan to relocate over 4,000 forcibly displaced Myanmar nationals to the island in fifth-phase.

The Rohingyas left the Chattogram Boat Club jetty in six ships of Bangladesh Navy around 10:30am in a festive mood and landed in the island around 2:00pm, Additional Refugee Relief and Repatriation Commissioner Mohammad Shamsud Douza told the Daily Sun.

Before going to Bhasan Char, they were brought to a temporary transit camp at Ukhiya Degree College playground in Cox’s Bazar on Tuesday and later taken to Chattogram.

They stayed at BAF Shaheen College in the port city overnight on completion of their registration process.

Over 2,000 Rohingyas will be taken to the island today (Thursday) as part of the fifth-phase relocation process, sources said.

Earlier, a total of 9,709 Rohingyas were taken to island Char in four phases.

First batch of the persecuted Rohingyas reached the offshore island on December 4 last year while the second batch on December 29, third batch on January 29 and 30 this year, and fourth batch on February 15 and 16.

Most of the Rohingya people were seen happy while heading towards Bhasan Char with their family members and necessary household items under the supervision of Bangladesh Navy.

Middle-aged Amena Begum said she was going to Bhasan Char willingly after knowing about the facilities developed there.

“My relatives who went to the island earlier convinced me to go there to have a better life,” she said.

Elderly Abdur Rahman said they arrived in Bangladesh in the face of the brutal atrocities by Myanmar security forces in 2017.

“We had been living at a shanty at a camp at Ukhiya upazila in Cox’s Bazar district. My family members expressed interest to go to the new place to get rid of the problems prevailing at the camps,” added Rahman. Mentionable, Bangladesh is currently hosting over 1.1 million Rohingyas and most of them took shelter in Cox’s Bazar following ethnic cleansing and genocide by Myanmar security forces from August 25, 2017.

In addition to modern accommodation for the Rohingyas, educational institutions, hospitals, clinics and playgrounds have already been set up at the Bhasan Char.

Navy implemented the Tk 31-billion housing project, funded with public money, after the government planned to relocate a portion of them to the island.

There are 1,440 cluster houses and 120 four-storey shelter houses to accommodate more than 1 lakh people, said the sources concerned.