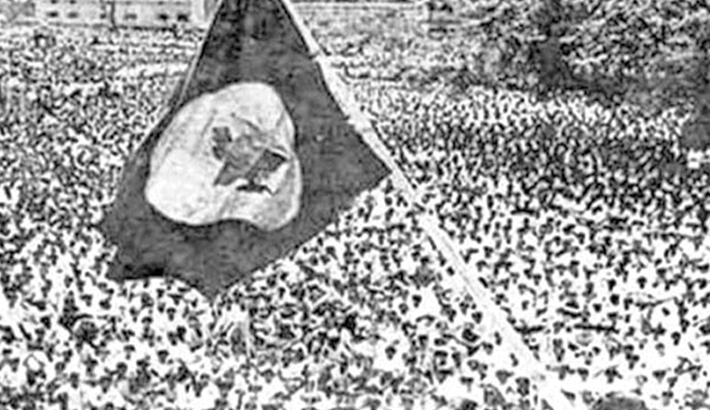 In March 1971, the vision of independent national sovereignty became politically dominant, for the first time. Its organizational strength and mass appeal remained outside the halls of constitutionalism, where its origins lay and where student organizations had nurtured its evolution; but now it began to acquire influential Bengali adherents in government circles.

On 2 March, spontaneous hartals occurred all over East Pakistan. People came from all over Dhaka and suburbs to the Bat-tala at Dhaka University, where crowds sang of national independence, SBKCSP (Bangla Kendriya Chhatra Sangram Parishad) leaders solemnly declared independence, and A S M Abdur Rob, a Student League leader and vice president of the Dhaka University Central Student Union, hoisted the flag of Bangladesh to the tumultuous applause and cries of “Joy Bangla”.

The next day, 3 March, the SBKCSP held a mammoth public meeting at Paltan Maidan, Dhaka and issued a declaration of Bangladesh independence, which began, Joy Bangla: Proclamation of independence. Independence for Bangladesh is hereby declared. It is now an independent and sovereign country…. The name of this territory of 54,506 square miles is Bangladesh… The SBKCSP invited people to form resistance cells in every village, town and city. They sang Amar Sonar Bangla as the Bangladesh national anthem.

On 6 March, General Tikka Khan became East Pakistan’s governor and martial law administrator, and crowds chased the army in Jashore, where Bengali-Bihari riots erupted. Faced with popular rebellion, Yahya Khan announced that the National Assembly would convene on 25 March, in Dhaka. Yet the Awami League and all the other East Pakistan political parties continued with non-cooperation. At this point, Sheikh Mujib may have hoped to force open the door to a federal future with the promise of endless mass rebellion, should his six-point plan be again denied.

Events on 7 March 1971 dramatized Sheikh Mujib’s political predicament, for he was, at that moment, both the personification of a Bengali nation in the midst of a popular rebellion against Pakistan, and also the elected majority leader of parliament, poised to become Pakistan’s prime minister.

On 7 March, millions assembled to hear him at Ramna Race Course, chanting “Joy Bangla” and waving lathis to signal their readiness to fight. In his speech, Sheikh Mujib dwelled at length and in minute detail on his six-point programme and on his conditions for joining the National Assembly. Until the Pakistan regime met his conditions, he said, all offices, courts, and schools would be closed, all cooperation with the government suspended. He directed people to make every home a fortress and to fight with whatever they had ready in hand. He ended his speech by declaring: “This struggle is for emancipation! This struggle is for independence!”

His rousing speech had a double meaning. It evoked two meanings of independence by promoting constitutionalism and a freedom struggle. This landmark speech inspired a popular revolution, whose force and organization came from outside the halls of constitutional politics and quickly commandeered East Pakistan state institutions, as it generated numerous unambiguous declarations of national sovereignty, composed and endorsed by major public figures.

The Student League approved a declaration of independence and invited Sheikh Mujib to form a national government. Maulana Bhashani and Ataur Rahman Khan declared independence in a mass meeting at Paltan Maidan. Bhashani circulated a signed leaflet to explain the meaning of “independence”, which was complete national sovereignty.

On 14 March, the SBKCSP prepared for war, by raising checkpoints in Dhaka to stop military supplies and cargoes to West Pakistan. Ataur Rahman Khan again called on Sheikh Mujib to form an interim national government. On 15 March, Yahya Khan arrived Dhaka with senior generals and officers. The SBKCSP then proclaimed that Bangladesh was already independent, that the Pakistan government had no right to rule, and that Bangladesh would only obey orders from its chosen leader, Bangabandhu Sheikh Mujibur Rahman.

They invited the citizens of Bangladesh to prepare for armed struggle. Nevertheless, on 16 March, Sheikh Mujib began talks with Yahya Khan. He continued to follow the constitutional path amidst a popular revolution led by loyal followers who rallied behind him, but also pursued a vision of national sovereignty rushing along very different path. As Sheikh Mujib continued his dialogue with Yahya Khan, the popular struggle entered its third week.

On 18 March, the SBKCSP called on the world community to support Bangladesh national independence. On 19 March, East Bengal Regiments refused to fire on protesters. Fights broke out between East and West Pakistan soldiers at the Gazipur Ordnance Factory and Joydevpur cantonment. On 20 March, Maulana Bhashani held a press conference in Chattogram, where he asked Yahya Khan to form an interim government, with Sheikh Mujib as chief and to decide what relation independent Bangladesh would have with Pakistan.

Pictures of the Bangladesh national flag appeared in newspapers on 22 March. On 23 March 1971, Pakistan Day became a People’s Independence Day in Bangladesh. The SBKCSP led the mass rejection of Pakistan Day and directed all nationalists to hoist the Bangladesh flag on homes, offices, and vehicles. At Paltan Maidan, the Joy Bangla Bahini held an independence parade, where SBKCSP leaders received salutes from uniformed platoons, which saluted the national flag and sang the national anthem, ‘Amar Sonar Bangla.’

Led by the SBKCSP, 10 platoons and a “Joy Bangla” Bahini band paraded to Sheikh Mujib’s house, where they raised the national flag. On 24 March, soldiers chanted “Joy Bangla and saluted the Bangladesh flag at the Jashore headquarters of East Pakistan Rifles. On 25 March Chattogram port workers and officers refused to unload cargoes from the Swat, a ship from Karachi full of military ordnance. The people of Chattogram raised barricades on major roads to stall Pakistani troops. Yahya Khan and West Pakistani leaders left Dhaka, and at midnight, the Pakistan army launched a brutal assault.

On 2 March 1971, this initial version of the flag was hoisted in Bangladesh for the first time at Dhaka University, by student leader A. S. M. Abdur Rab, the then Vice President of Dhaka University Students' Union (DUCSU) The flag was conceived so as to exclude the star and crescent considered as symbols of West Pakistan (now Pakistan).

“Historic ‘National Flag Hoisting Day’ was observed on Monday, March 2. The then DUCSU president ASSM Abdur Rab hoisted the green background with a red circle symbolizing flag of the dream of independent Bengal at historic Bat-tala of Dhaka University at a student assembly.

Another student leader Shajahan Siraj hoisted the National Flag through National Anthem in presence of Bangabandhu Sheikh Mujibur Rahman on March 3 next day.

On March 23, Bangabandhu Sheikh Mujibur Rahman first hoisted the National Flag at his residence in Dhanmondi. The National Flag was hoisted for the first time on April 18, 1971, at the Bangladesh Mission in Kolkata, India.

The Red-Green National Flag with a Golden Map drawn in the middle of the red disc on the green field. Later the map was removed from the Bangladesh flag on January 12, 1972. The national flag of Bangladesh was adopted nationally on January 17, 1972.

The people responded the March 2 strikes called by then DUCSU leaders against the exploitation, wrongdoing, oppression, injustice of Pakistani rulers. In fact, through the hoisting of the flag on that day, the Bengali students, people were inspired in the freedom struggle and started the path of attaining independence.

The flag hoisting suggested that there is no alternative to independence and considered as a National Flag of Independent Sovereign Bangladesh that emerged in exchange for blood after 9 months long with many sacrifices and struggles on 16 December, 1971.

History is a way of learning... The historical experience is not one of staying in the present and looking back. Rather it is one of going back into the past and returning to the present with a wider and more intense consciousness of our outlook. We return with a broader awareness of the golden past open to us and armed with a sharper perceptiveness with which to make our choices.

Historians with a very long-term view of the past that provides the context for 1971 would emphasise that people in the land that became Bangladesh had declared independence many times, in many idioms, over the centuries. Political theorists and historians would also point out that even in the 20th century, the term "independence" has not been used only to mean national state sovereignty. Historically, proclamations of independence have taken many forms, each appropriate in its own setting. And so, they did in the land that became Bangladesh until in March 1971, when the idea of independence acquired a new context, which never existed before and gave proclamations of independence new meaning.

The writer is an independent political

analyst who writes on politics, political and human-centred figures, current and international affairs.